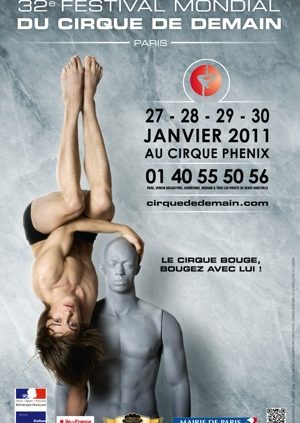 International Circus Festival of Tomorrow during 2010

Paris just like any good city has a busy agenda and a diverse array of activities on offer, in addition to its abundance of museums including the world famous Louvre, monuments, characteristic districts, culture, and history making it one of the most popular destinations for tourists all year round. The city is particularly famous for the stunning lights and decorations that adorn the French capital and the prestigious Champs Elysées shopping avenue where the city’s annual New Year’s Eve party is held welcoming thousands who gather there to see in the New Year.

However, the Christmas celebrations in the City of Lights are soon coming to an end but not to worry there’s no chance of you getting bored because the "Festival Mondial du Cirque de Demain" or International Circus Festival of Tomorrow is coming to the French capital on the 27th of January 2011 to keep you and all the locals in Paris well entertained.

Not quite Cirque du Soleil but as equally entertaining, the annual International Circus Festival of Tomorrow at Paris’ Pelouse de Reuilly, offers the chance to catch the world’s finest circuses under one roof. This event features young, upcoming circus performers who have been given the opportunity to showcase their talents to the press, international jury, and a curious and enthusiastic public. As a result, some of the most extraordinary circus artists of contemporary circus have been revealed to the world, and their immediate success has followed.

Since the festival was founded in 1977, next to 1000 participants have performed in the Circus of Tomorrow and a further number of artists from all over the world have been invited to participate in this circus event held every year in the heart of one of the most beautiful cities in the world to share their experience, discover new ways and perform the most contemporary feats before a fascinated public.

This includes young circus artists from such diverse schools as the Beijing Circus, the Moscow Circus, the Swiss Knie Circus and France’s own Ecole Fratellini who compete at the festival in a bid to discover the stars of the future. Thus, every year dozens of acrobats, tight-rope walkers, clowns, jugglers, and trapeze artists gather in Paris to perform attracting all those that love the circus including artists, successful candidates from previous editions, agents, producers, promoters, lovers of this art, and devoted fans who come to the French capital to share some of the most precious moments in the world of the circus.

This year’s edition will be taking place from the 27th to the 30th of January 2011, and will cost from 15 to 19 euros a ticket. Either way this festival certainly promises to be entertaining and if we go on past editions very popular, so if you would like to go to the International Circus Festival of Tomorrow then check out their website for more information, and to book yourself a seat.

Posted in Art and Museums in Paris, Paris
Laura