Interview with Patricia Ciriani, organiser of the Lliliput Festival in Barcelona 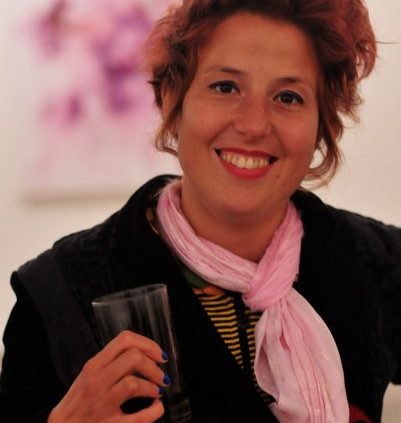 As you probably already know, the Lliliput Festival was set up to bring people closer to art and revive the typical Barcelona kiosks located in the doorways of buildings. We have been fortunate enough to speak to the director and the only organiser of the Lliliput Festival, Patricia Ciriani. Now we would like to share with you what she had to say as there is nothing like the viewpoint of this French lady (with latin roots) living in Barcelona, to better get to know the intricacies of the cultural and artistic life in the Catalan capital. In this interview, she told us about what motivates her, her view of cultural life in Barcelona and the future of the festival that she organised herself, as well as that of Barcelona. Read carefully, because this is a master class on the artistic and cultural scene of our favourite city.

1. A little bit about your experience and what motivates you

I’m French and I was born in Paris. I came here when I was 33 years old with the idea of working in what I knew how to do, organise exhibitions. I was really lucky and got a years contract to organise an exhibition in the MACBA (Barcelona Contemporary Art Museum), ´la expo de Teatros y Teatros` (the Theatres and Theatres) exhibition, and then I was hired to organise the exhibition ´En la Cuidad China` (In china Town) in the Barcelona Contemporary Culture Centre (CCCB). In the meantime, I was working with the Catalan government on the Euroregional gateway.

Later, I decided to go freelance and I organised an exhibition in the Sala d’Art Jove, which was called Globalkiosk. It was a prefiguration of the Lliliput Festival. Ever since I came to Barcelona, I noticed that there were kiosk stairs, a typology that I discovered here, and that don’t exist in Paris or that did exist but that I only have a vague memory of. The difference is that here, they are in the doorways. I realised that there must be about 100 of them, 2/3 of the first 70 of which were freely being used and the rest were just closed. That was when I found out that the City Hall wanted to close them all in line with local legislation prohibiting really small shops. It seemed such a shame to me to get rid of them, and my idea involved doing something new with them. And that’s where my first idea came from for the Lliliput Festival, and installing art pieces in kiosks to give them a new life.

This year I’ve really enjoyed going in the kiosks and suggesting like a game with the streets, because last year there wasn’t a lot of interaction with the people on the streets, it was more just contemplating the art works. The most successful kiosk was the one that had a dance show which brought the people inside and viceversa, a constant game that never ends, that is what I was interested in. And that’s what I’m interested in, that conflict between private use of housing and public use of the street.

2. What inspired you to organise a festival like Lliliput?

The idea was to use these spaces to set up art works, but mainly be connected to the street, the idea of bordering between entering a semi-private space and a semi-public space, which is what the city does really. It’s a mixture of uses and also it’s about the opportunity of having this exchange on the street with someone you don’t know, which is what the stairs in these kiosks allow you to do, because you go into the houses and you pass people or the kiosk owner and you experience another kind of contact, neither public nor private.

3. What kind of people do you think will be interested in this type of project?

Anyone. That’s the cool thing about it. The idea is not to aim at the elite, but bring the museum to everyone and all kinds of culture, whether it’s the most popular like electronic music, or like the elite such as films from the film director Jean Charles Fitoussi. But, really lots of different kinds of people come and watch Fitoussi films. For example, I see the police coming on their break, and we put a film on for them which they watch until the end. And that fascinates me. Because they spend their breaktime watching a film which isn’t what they would normally do, because they would normally have to pay for Hollywood films. This is the reason why these kinds of films don’t get to the people on the street, at all. And what always interests me about art is that it touches people, and it goes well with anyone.

4. Do you think that Barcelona is more inclined to organising these kinds of festivals?

Yeah, definitely, mainly because of street culture, which is really big here. This is something which is fading out in Paris, where there was once this culture of wandering down the street, like they did in the 20s. And I think this is for cultural reasons. Look at the women on the Barceloneta, who bring out their chairs to watch the TV there, something this has been made impossible by local legislation, and which is a terrible democratic mistake in my opinion. And its shame, because mixing spaces instead of homogenising them is what makes a city.

5. What do you see for the future of Lliliput and the artistic scene in Barcelona, in general?

I think, and I bet that there will be more of a street culture, which goes totally against local legislation. I bet it will be the complete opposite, more spaces that are still public will be invaded so that really popular culture is the base, and not something that is imposed by the Mercé or other festivals authorised and organised by the City Hall.

I see the festival growing to become more scenic art than contemplative installations like last year. I’m not interested in setting up new art galleries, I’m more interested in exchanges happening between the inside and outside of the kiosk. Something that corresponds more to the kiosk on Bonsucces Street with their DJs, and that of Sant Pere Mes Alt that screen free films because they also think that culture should be free. I think that a lot of museums are really expensive which makes people only go to exhibitions about once a year or, at least very little. And that’s a shame, because the truth is, is that you need to see an exhibition several times and that’s the idea of the festival on the street, where you can see the art works several times, because its not the same one every day. That’s why they look at it differently every time you walk past. And that experience stays with you which is what I’ m interested in, because that is the experience of art. It is a purely sensory experience that is better shared with people and that is something that happens on the street, because in the end you share that sensation with someone you don’t know. It’s important to get across to people that art is not created to stimulate the few privileged people that have studied art, but that it is aimed at a community of people that discover themselves when they look at the art, that they look past the art.

Well, we hope that you enjoyed the interview with this art expert who has shed light on some of the many sides of Barcelona that we didn’t know about, and above all on the part on the Lliliput Festival. Don’t miss out on the travelling dance show by Myriam Maridablanca as an alternative to the pope’s visit on Saturday the 13th of November, and to get more information check out their website.