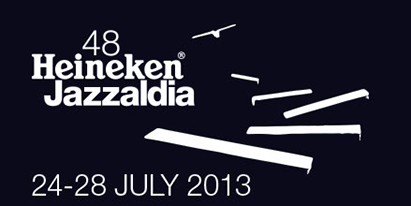 The smooth rounds of jazz are going to float on the summer breeze over San Sebastianwhen the 48th edition of Jazzaldia returns from the 24th to the 28th of July 2013. This year organisers have put together a world class festival, featuring some of the biggest names in jazz and pop including John Zorn, Diana Krall, Jamie Cullum and Elvis Costello.

The opening night of Jazzaldia 2013 will see the so called bad boy of jazz, British singer and pianist Jamie Cullum, take to the Green stage. He is sure to delight the crowd gathered on Zurriola beach with his energetic stage show and infectious mix of jazz and pop. Following directly after Jamie Cullum is the Shibusa Shirazu Orchestra, a Japanese band who accompany their free jazz with dance, animation and performance. An exciting opening night for what promisies to be the best Jazzaldia in recent years. The Green stage is set to host some of the best concerts throughout the festival and best of all admission is free.

Another highlight of the Jazzaldia 2013 festival will undoubtedly be the John Zorn: Masada Marathon, twelve successive groups playing in a marathon concert which is set to last between 5-6 hours. Zorn, a key figure in contemporary jazz, has chosen Banquet of the Spirits, Mycale, David Krakauer and The Dreamers and many others. Zorn will be performing twice on what promises to be an unforgettable and difficult to repeat night of jazz.

Local jazz artists will also be well represented at Jazzaldia 2013, with 18 groups of the more than 50 appearing at the festival coming from the Basque Country. Ten of the groups had to pass a gruelling selection process, five for having released an album in the last year and the remainder have an agreement with the organisers.