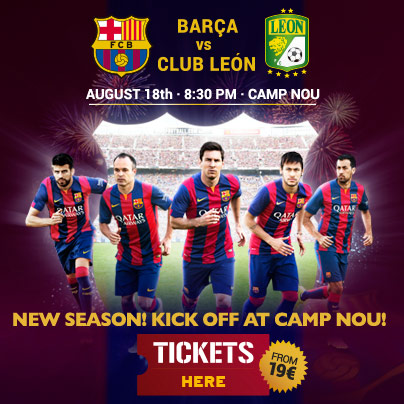 The Gamper is one of the most well known friendly football matches. As well as commemorating the history of F.C. Barcelona, it also represents the start of the football season in the Camp Nou and serves as the official presentation of the team in front of their fans. This year the match takes place on the 18th August. The Joan Gamper trophy was born in 1966 under the initiative of Enric Llaudet who was the President at the time. His intention was to pay tribute to the founder of the FC Barcelona, the swiss Hans Gamper, known in Catalonia as Joan Gamper. Joan Gamper, founded the club in 1899 and was elected President 5 times and in the very beginnings of the club also played in the first team. The blaugrana colours of the first team were based on those of the FC Basilea where Gamper started his football career.

The 49th Gamper Trophly takes place on the 18th August at 20.30h. This year their opponent is the Mexican Club Leon, winner of 7 leagues, 5 Mexican Cups and last season was proclaimed winner of the Torneo Clausura mexicano. Club Leon is also the current team of the ex Barça player, Rafa Martinez.

The Gamper match will represent the debut of Luis Enrique as the coach of FC Barcelona. On the field we’ll also be able to see the new arrivals to the team: Ter Stegen, Mathieu, Luis Suarez, Ivan Rakitic, Cladio Bravo, Deulofeu, Rafinha y Jordi Masip. Manuel Arroyo, vice president of communication in FC Barcelona also announced that the Gamper Trophy 2014 will be a tribute to Carles Puyol and Victor Valdes who left the team this summer.

The tickets for the Gamper Trophy 2014 are already on sale. You can purchase yours here from 19€. Members have a 25% discount and for each adult ticket, any members under 14 years will have free entry.

Wait no longer and enjoy the start of the football season 2014-2015. A new season with new challenges!