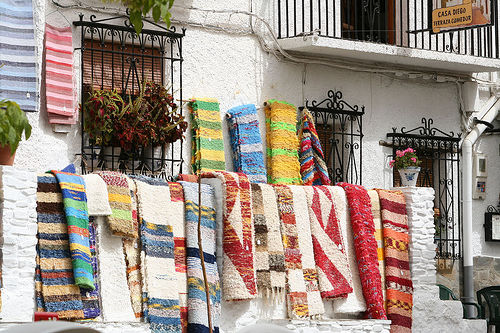 La Alpujarra has been for many centuries one of the least well-known regions in Spain. Its austere and mountainous countryside, full of hills, peaks and valleys, means that this region has remained isolated. In fact, the only people who managed to stay here for a long period were Muslim settlers from Africa. Then, La Alpujarra was forgotten for a long time, until it was rediscovered by travellers and artists of the Romantic period. Dotted with white villages of Mozarabic origin, the mountains of Alpujarra have a unique personality, and hide castles, old stone bridges, Mediaeval towers and ancient windmills amongst their landscapes. However, the most characteristic aspect of La Alpujarra in Granada is still its white houses, with flat roofs and cylindrical chimneys, which seem to be crowned by little stone hats. During autumn, it’s not unusual to see corncobs and other products of the earth on the roofs drying out in the sun. The narrow, winding streets of the steep hills of these towns still manage to impress and fascinate all travellers here.

As well as its white houses, another distinctive element of La Alpujarra in Granada is its handicrafts. The most typical are cloth products and especially “jarapas”, which are handmade rugs made from thick wool and bright colours. But ceramics, wrought iron and woodworks are also traditional. During the past years, there’s many writers, painters and musicians who – captivated by its scenery – have decided to convert La Alpujarra in Granada into their home, meaning that in some villages traditional atmospheres mix with the bohemian.
Some of the towns which best represent La Alpujarra in Granada are Órgiva, which is the capital of the region; Trévelez, famous for its Spanish ham; Pampaneira, the main producer of the “jarapas”; Capileira and Bubión, which make up a port of a historical collective, and contain interesting buildings from the Roman and Mediaeval ages; and Lanjarón, where there are many springs and in summer the traditional “water race” takes place.

We shouldn’t forget either that La Alpujarra is in the highest mountain range of the Iberian Peninsula. It contains peaks as high as Mulhacén (3,479 m) and Veleta (3,396 m), making it a perfect destination for lovers of mountains and nature. If you like hiking, rock climbing, canyoning, skiing and other mountain sports, in La Alpujarra in Granada you’ll be like a child in a sweet shop. There’s numerous hiking, horse-riding and cycling trails, and during winter, the ski slopes of the Sierra Nevada are the best in all of Spain for sliding down the cold snow.