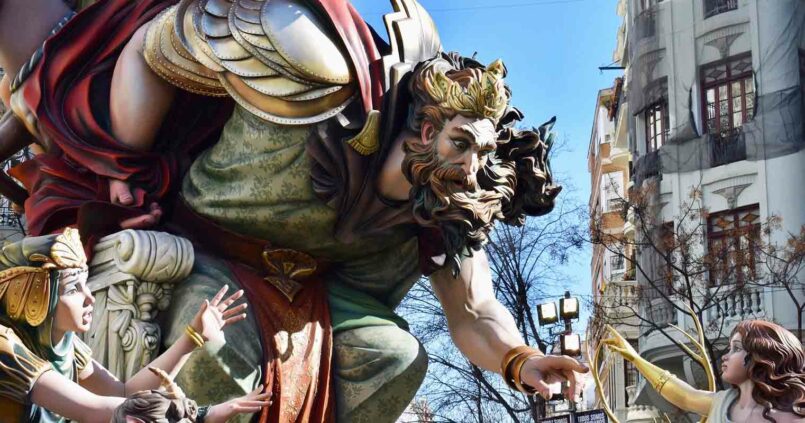 Photos of Las Fallas in Valencia

The first written records of Las Fallas date back to the 18th century. There are several theories as to how it arose, but the most widespread one holds that it all began when the guild of carpenters in Valencia decided to burn the planks of wood they hung their candles from to work at night in winter in honour of their patron, Saint Joseph.

Las Fallas in Valencia are a true street extravaganza, with huge, grotesque, satirical figures (ninots) that use art to poke fun.
Every year there are around 700 fallas, so make sure you’re armed with a good map and sturdy footwear if you’re planning to visit them all and enjoy this most ephemeral of art forms.

On the Nit de la Cremà (Night of the Burning) the fallas are burnt and fire takes centre stage to mark the end of the festivities.

The Cabalgata del Fuego (Fire Parade) is another key moment of Las Fallas in Valencia: a parade with music, dance and fire-running that takes place before the fallas are burnt to ash.

Although fire and firecrackers are the kings of the festivity, as you can see in these photos, the street illuminations come a close second…
Millions of lightbulbs adorn the streets, creating dazzling installations that echo the ones at the Feria de Abril, in Seville. Ruzafa neighbourhood is said to put on the most impressive display.

During Las Fallas, Valencia doesn’t sleep. There are concerts, firework displays, music and bonfires that turn the city into one big party.

A calmer moment arrives with the floral offering to La Virgen de los Desamparados. Hundreds of people dressed in typical Valencian costumes lay flowers to music to make up an almost 15 m high structure of the cloak of the Virgin Mary.

La Fallera Mayor and La Fallera Mayor Infantil are the representatives of the board of festivities. They are chosen by judges and serve as ambassadors for Las Fallas for the year of their reign.

The mascletàs at Las Fallas make the ground and your ears shake. These firework displays set off strings of powerful firecrackers to create a crescendo towards the final bang. For many, these strings of bangs and cracks are a form of music…

So, after seeing the photos, are you up for going this year?