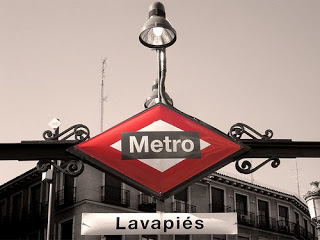 A walk through the streets of Lavapiés in Madrid

Lavapiés is one of the oldest neighbourhoods in Madrid. Over the last few decades it was a cheap neighbourhood which attracted people both young and old, immigrants from all over the world: Moroccans, Indians, Chinese…Lavapiés has progressively modernised over the last two years and today it offers a multicultural and bohemian environment whose residents live in the most cosmopolitan neighbourhood of Madrid.

Every Sunday Madrid’s famous El Rastro market takes place in Lavapiés apart from this throughout the year you can participate in theChinese New Year celebrations, Ramadan or simply watch an exhibition of belly dancing or marvel at the marvellous choreographies of Bollywood. But what is giving the neighbourhood of Lavapies in Madrid a final push is the concentration of art galleries surrounding the Museo Reina Sofía . Since 1995, with the opening of the Helga de Alvear Gallery, Doctor Forquet Street has become the art centre of Madrid.

The cultural interest of this street along with other references Museo Reina Sofia, the TLa Casa Encendida, La Casa Encendida, la Filmoteca Nacional or the social centre La Tabacalera means Lavapiés is a lively neighbourhood. What else can we do in Lavapiés after going to the theatre or visiting an art exhibition? We suggest taking a stroll through the recently recuperated San Fernando Market, where a group of young people have rehabilitated close to 20 stalls with a focus on local produce, handcrafts, and ecological produce.

Among all that the San Fernando market has to offer we can find many fun and tasty offers such as:

And of course after a hectic day there is nothing better than putting your feet up in one our apartments in Lavapiés, like the Olivia II or the Joyce II with light filled living rooms and balconies which allow you to continue enjoying the bohemian neighbourhood of Lavapiés.

The Top Vegetarian Restaurants in Madrid