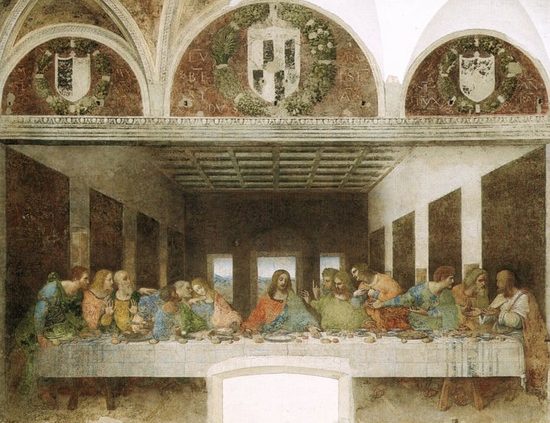 We’ve seen it in art books, in Hollywood films, in photographs… almost everyone knows the highly famous painting of “The Last Supper” by Leonardo da Vinci, but what not everyone knows is that this universal masterpiece of painting can be found in Milan.

Leonardo da Vinci was born in Florence in 1452, but it was in Milan where, in the service of the duke Ludovico Sforza, he grew as an artist and engineer. The Italian city was in those days open and full of new ideas, very much in keeping with Leonardo da Vinci’s restless spirit.

His main works in the city were as an engineer: the loch system in the Naviglio Grande, various studies for the dome of the cathedral, structures of the stages of theatres… but he also painted diverse portraits of the Milan court and some of his best works here, including two versions of the Virgin of the Rocks and The Last Supper.

THE SECRETS OF THE LAST SUPPER

The Last Supper (1495–1497) is a mural painting in the refectory of the convent of Santa Maria delle Grazie in Milan. It was commissioned by Ludovico Sforza. Although it is often referred to as a fresco, Leonardo da Vinci actually used an experimental technique of oil and tempera on a dry wall, which enabled him to work on the details on dry plaster, but meant the resulting painting was very fragile and has had to be restored on numerous occasions. It is believed that Da Vinci was keen to try out this technique because frescos dried very quickly and he often spent long periods of inactivity when painting.

This work reflects Jesus’ last supper, at which he told his disciples that one of them would betray him. Leonardo da Vinci used real people as models, and some specialists think he may have portrayed himself as Jude the Apostle. The Last Supper was designed to create the impression of the viewer being immersed in the painting and Leonardo da Vinci accentuated the perspective by working on the wall with hammer and chisel to create greater depth on some areas.

In 1652, the painting was damaged during restoration work at the convent of Santa Maria delle Grazie. A door was cut through the lower central section and Jesus’ feet were lost for ever. Although protected by sandbags, it suffered further damage in the Second World War and had to be restored again after the war. VISITING THE LAST SUPPER IN MILAN

The visits to see The Last Supper in Milan are strictly controlled: because of this, it’s absolutely necessary to buy tickets in advance. You can buy them by telephone or via the official website. We recommend reserving at least one month in advance.

Where: Piazza Santa Maria delle Grazie, 2.
When: from Tuesday to Sunday from 8.15 am to 7 pm.
How much: the price of a standard ticket is € 10, and reduced tickets costs € 5. Tickets bought online cost € 2, and are picked up in the ticket office.

Paintor, sculptor, architect, poet and scientist, Leonardo da Vinci was a genius who has gone down in history as a symbol of the Renaissance man. If you’re interested in seeing the rest of his works in Milan, as well as The Last Supper, have a look at the different Da Vinci trails in the Milan tourist board.

Posted in Art and Museums in Milan, Milan
Laura