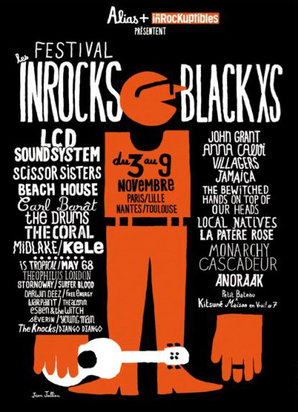 Music lovers of international indie, rock, techno and trip hop visiting Paris this autumn are in luck, as the popular and cultural magazine Les Inrockuptibles will be holding their annual alternative music festival, more commonly known as Les Inrocks Black XS from the 3rd to the 7th of November, comprising various venues in various locations of this charming city.

The line up for this 23rd edition is a pretty impressive one with bands such as ´The Scissor Sisters`, ´The Drums`, ´Surfer Blood`, ´Free Energy, ´Beach House`, ´Warpaint`, ´Patere Rose` from Quebec, the Liverpudlians ´The Corale`, and the Californian ´Local Natives`, amongst a long list of other groups performing in La Boule Noir, La Cigale, le Casino de Paris, and the Zénith de Paris. The event will also feature well-known figures on the music scene, as well as up and coming young artists.

Tickets for access to all the concerts taking place in this edition of the event will be on sale in FNAC stores located around the city. In addition, further confirmations plus a surprise evening taking place on the 8th of November in Paris will be announced shortly. This festival is a great way of being introduced to some of the greatest indie bands and groups of tomorrow, and has always featured great sounds, and artists that are now greats on the indie music scene. This year’s festival offers an eclectic programme that oscillates between well-known figures and up and coming young musicians, and will be taking place in four locations in France, the main event taking place in Paris.

Sno, make sure that you check out the programme (programmation), whether you’ re an alternative music fan or not, and head down to one of these venues, as like previous editions of this festival it promises to be a good one!