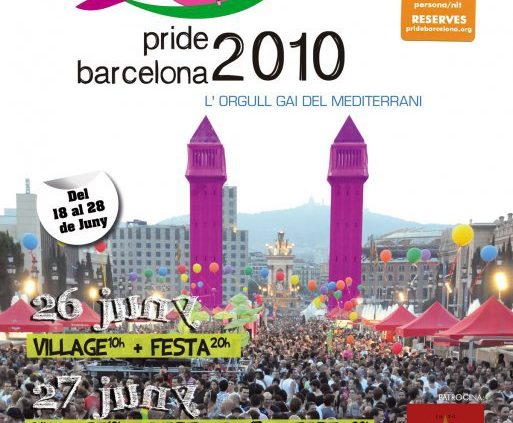 The 28th June Spain celebrates the Gay Pride Day and on this occasion Barcelona is welcoming you to join, from the 18th to the 28th June 2010, the most important Gay Pride parade on the Mediterranean coast. This Pride Party will host many different sorts of cultural and sport activities, apart from many parties and leisure activities for families and friends.

30 different associations, businesses and the entire LGBT community are supporting the organization of this free and non-profit making celebration. Included in the schedule is the 15th Lesbian and Gay Film Festival dedicated this year to France and South America and based at the French Institute from Barcelona where the main films and documentaries are shown. In addition to that, there will be organised several activities such as the so-called White Night with the performance of the electronic band Hidrogenesse, several meetings in the FNAC, where we will have the chance to participate in the presentation of the author Roberto Enriquez’s book, plus several short films focused on homophobia at the schools and meetings dealing with gender mainstreaming as well as comics on LGBT issues.

This celebration will be completed with several sport activities for families and friends, such as an exhibition of female and male synchronised swimming and a bicycle and roller-skate run through the city. The LGBT festival will be crowned with the Pride Parade the 27th June, which will crowd the city with people from all over the world, with floats and artists giving place to the Mediterranean’s largest pride parade. The march will kick off from Plaça de la Universitat at 6 pm, will go through Calle Sepúlveda towards Plaça de Espanya, till parking in Avinguda María Cristina, where the Institutions display and the party area will be opened.

But for those of you who are not entirely satisfied with this festival in Barcelona, a couple of weeks later you will have the chance to join the Gay Pride Sitges 2010, hosted for the first time in that popular tourist city of Sitges.

However it is,as appetizer, we show you the official video of the Pride Hymn for the Pride Barcelona 2010, performed by a popular comedy troupe from Barcelona, the Chanclettes: