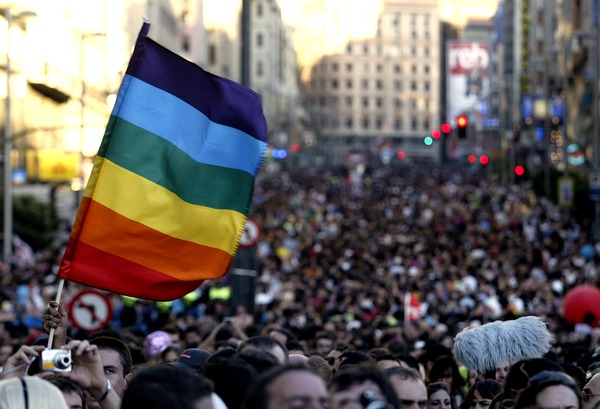 If you plan to come to Madrid at the end of June or at the beginning of July you mustn’t miss the gay pride celebration, which as you might know takes place the 28th June. However, the huge Spanish parade will be hold the third of July in the Spanish Capital as the culmination of a whole month full of different activities and celebrations through different Spanish cities and regions.

Madrid will host the Pride week 2010 between the 25th June and the 4th July and it will be a week crowded with diverse leisure and cultural activities to which several art galleries, theatre venues, pubs and discos will contribute with the aim that the whole LGTB community enjoys this amazing week.

One of the week highlights is the infinitagayweek, between the 1st and the 4th July and that includes parties and events such as Turn off the Light in Sala Heineken, Tú lo que tienes es un…shock! (What happens to you is that you are…in shock!) in Sala Macumba, the Infinita 2010 in Madrid Arena or the Space of Sound Orgullo in Sala Macumba. Besides, we can enjoy the performance of the well-known Spanish singer, Soraya, apart from different international top Dj sessions such as Peter Rauhofer, Danny Leblack, among others. If you are interested in art and theatre, you can attend different galleries with performances and exhibitions related to the LGBT movement, such as different performances in the DT Espacio Escénico.

As a culmination of the week, the 3rd July will take place the National LGBT Pride Parade 2010 that intends to unify all the Spanish folk under the motto: “Equality for trans”. Like every year, the parade will kick off from Puerta de Alcalá and will conclude in Plaza de España. Like every year the number of assistants is expected to rise thanks to the increasing attraction of such an initiative, which has contributed to improve the LGTB community rights through the Spanish territory and which has become one of the most indispensable parties within the national agenda, for the LGBT community and for those not belonging to it, but eager to enjoy a day with unlimited freedom.