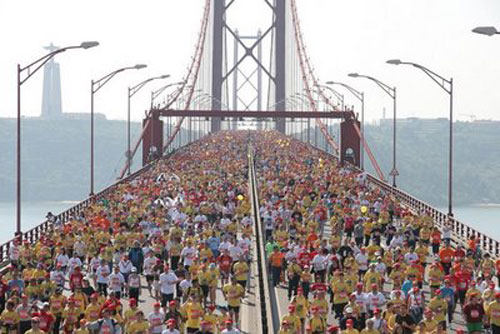 Lisbon Half-Marathon on the 16th of March

Recently we’ve noticed that marathons and half-marathons are taking place in the most important European capitals whereby the locals steadily make their way through the streets of the city in their eagerness to win and satisfy their competitive side. And, as the capital of Portugal, nothing less could be expected of Lisbon. Thus, now that spring has nearly arrived,the Lisbon Half-Marathon will be taking place on the 16th of March.

With an average 35,000 participants every year, the Lisbon Half-Marathon is one of the flattest and most accessible marathons in the world, making it easier to break a world record in these 21 kilometre (13 mile) races, during which runners cross the famous Vasco de Gama bridge and pass by some of Lisbon’s most emblematic sights such as Jeronimo’s Monastery.

Furthermore, on Thursday the 13th of March, they will be celebrating the official opening of SportExpo or the Sports and Recreation Trade Show. There will be activities and events at SportExpo coinciding with the marathon, the aim of which is to get everyone involved with this fantastic sporting event.

If you fancy taking part in one of the most important and maybe the most accessible marathons in the world, head down to Lisbon to see/enjoy the Lisbon Half-Marathon held on the 16th of March 2014.