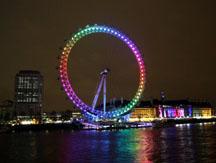 This summer, London will be the capital of sport and many other things. As well as celebrating the Olympic Games and the Queen’s Diamond Jubilee, the home of Big Ben’s will be the seat of World Pride 2012, the most important gay event in the world, which will be filling the streets with colour from the 23rd of June to the 8th of July.

World Pride is a festival which promotes the rights of gays, lesbians, bisexuals and transsexuales (LGBT) around the world. Now in its third edition, having already passed through Rome and Jerusalem, the event hopes to grow up in London and become the biggest gay pride festival that’s ever been seen.

The gay pride celebrations in London have always been among the most animated and dynamic of Europe, and if we take the rumours we’ve heard and the promises of the organisers into account as well, in 2012 they’ll be huge.

Running over two weeks, there’ll be debates, poetry, music, themed parties, theatre, dance and a load of activities that aim to pull together more than a million festival-goers in the British capital. London World Pride will culminate with a gay pride parade.

The parade will take place on the 7th of July, and will strut its stuff through the main streets of the city, like a multi-coloured tide of over 1km. There’ll be large quantities of floats, music and good vibes. After the gay pride parade, there’ll be a large party in Trafalgar Square, with activities and artists from all over the world present to keep the crowds company.

Most of the details of the official programme, parade route and featured artists have yet to be confirmed, but they’re sure to exceed our expectations and more. What we do know is that, like last year, a gala dinner will be organised and a family area will be sectioned off so parents and children can enjoy a space in which to enjoy the festivities in a safe and relaxed environment.

Despite the festival atmosphere, we should remember that World Pride has a strong political undercurrent. Conferences this year will be centred around the fight against homophobia, suicide in the LGBT community, health and wellbeing and love without borders.

If this is your sort of thing, London is the place to be from the 23rd of June to the 8th of July. Or, if you prefer to be on the beach or under the Eiffel Tower, have a look at what they’ve been preparing for gay pride in Sitges and Paris.