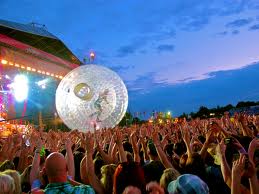 The grey days are mostly gone, deck chairs and semi clad office workers on their lunch break can be seen in the London parks. Summer has come to London. It’s also the time for London’s Summer Music Festivals. Forget heading out into the English country side this summer stay in London and enjoy London’s Best Festivals.

Wireless Festival- Massive! An incredible line featuring Kanye West, Pharrel Williams, Rudimental, Basement Jaxx, Pretty Lights and more. This year sees the Wireless Festival celebrate its tenth year and moves from Olympic Park to Finsbury Park. Expect crowds of over 20,000 for each of the three days. Tickets are on sale now. When: 4-6 July 2014 Where: Finsbury Park.

British Summer Time Hyde Park– After the runaway success of last year’s event BST Hyde Park is back with another stellar line-up. Arcade Fire, Black Sabbath, The Pogues, Tom Jones and Neil Young. Two weekends, four stages and four themed zones with restaurants, bars and food stalls make this a not to miss music festival in London. Plenty of other events occur during the week, film, sport, literature and a family day. Where: Hyde Park When: 3rd-13 July 2014.

Lovebox- London’s answer to Barcelona’s Sonar Festival. Cutting edge fashion, party animals and those who come to be seen and an amazing line up, MIA, Katy B, Bonobo, Woodkid, Crystal Figters and the Martinez Brothers just to name a few. Possibly the highlight of all the London Summer Music festivals. When: 18-19 July Where: Victoria Park

South West Four Weekender- Clapham Common is the site for London’s famous clubbers festival. Festival goers will be waving their arms in the air and moving to the sounds house, techno and trance. This year’s line up features Deadmau5, Pete Tong, Tiga & Audion and Paul Kalkbrenner. When: 23-24 August Where: Clapham Common

This summer if you’ve got nothing planned go to London and party like you’ve never partied before. Go wild!