Madrid for Dummies, what to see in Madrid 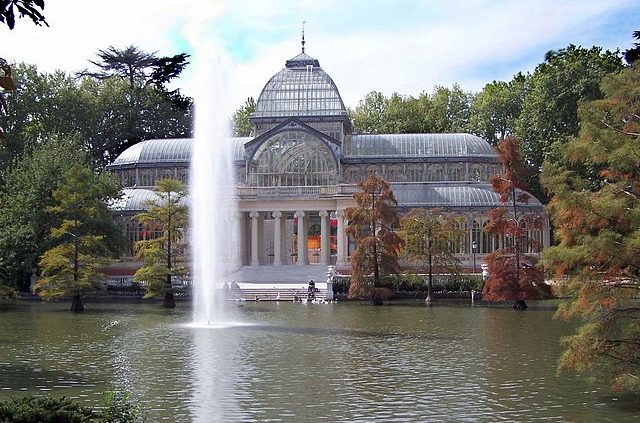 Madrid is well-known for the variety and character of its districts,each with its own identity and lifestyle not found anywhere else in the city. However, there are certain places that are a must-see in Madrid. We have selected five obligatory places in the city to visit: Plaza Mayor, Puerta del Sol, Palacio Real, Retiro Park, Museo del Prado, and (for all you sports fans out there) the Santiago Bernabeu Stadium.

Located in the centre of Madrid, the Puerta del Sol is one of the Spanish capital’s most famous places. It is a very busy place with a large number of shops and you can also find kilometre 0, which marks the beginning of the Spanish road system.

On New Year’s Eve thousands of people gather in the square to bring in the New Year eating 12 grapes on the stroke of midnight, one for each chime of the clock marking the start of the New Year.

The clock in Puerta del Sol was built in 1856, and in 1997 the large equestrian statue of Carlos III created by Miguel Angel Rodriguez and Eduardo Zancada, was installed..

Don’t miss the famous statue of the strawberry tree and the bear, which is also a symbol of Madrid. Over the years it has become the unofficial meeting point for Madrid locals. For a short time it was moved to Calle Carmen, then returned to its original place in September 2009.

Plaza Mayor is situated in the city centre, not far from Puerta Del Sol. It’s another symbolic place in Madrid. The name has changed often over time. This is a great place to visit during your stay, and the shops and different restaurants making it particularly pleasant.

In the middle of the square is the statue of Felipe III . It was begun by the Italian sculptor Juan De Bolonia and finished by Pietro Tacca in 1616.

Today Madrid’s Plaza Mayor is an important tourist destination attracting lots of people all year round. Various festivals and shows take place in the Plaza during the year and it is also a popular place to see street artists and performances.

There are a lot of parks in Madrid that you can visit, however we strongly suggest that you visit “El Parque Retiro”.
This beautiful Park built by King Philippe IV in 1632was converted to a public garden in 1869. It has many outdoor attractions, such as a music kiosk, puppet show, and boat rides on the lake, plus you will unexpectedly meet with jugglers and drummers performing in the park. The Palacio de Cristal (Crystal Palace) built by Ricardo Velázquez Bosco in 1887 is now a regular exhibition venue.

Access: Retiro Park is located in the east of Madrid, not far from the Prado Museum. The main entrance is near Puerta de Alcalá and la Plaza de la Independencia. Metro: Retiro
Opening Hours: From 1st October to 30th April: 6 am until 10 pm, from 1st May to 30th September: 6 am until midnight.

The Palacio Real is the residence of the King, but it is only used for state ceremonies. The Muslim king of Toledo ordered the construction of the Palaceand it was subsequently destroyed by fireon Christmas Day in 1734 on Christmas Day. Felipe V decided to rebuild another palace in the same place but this time using bricks to avoid further fires.The decoration of the Palace has changed over time, and in accordance with different artistic styles.

Situated in the centre of Madrid, and a short walking distance away from the financial district, this stadium is one of the most important in the world. It has an approximate 80,000 person capacity.
The stadium belongs to Real Madrid, and of course you can visit the stadium and wander around the trophy room. Access to the pitch is an unmissable event for Real Madrid fans.
Access: Metro Santiago Bernabeu, line 10. Bus: lines 14, 27, 40, 43, 120, 147, 150.
Opening Hours: Saturdays and weekdays: 10 am – 7 pm, Sundays and public holidays: 10 am – 6.30 pm, Match Days the stadium closes at 2 pm.Admission Prices: Adults: €19, children between 5 and 14: €13, free for children under 5.

Situated in the city centre, the Prado museum is located in one of most interesting areas in the Spanish capital, and its enormous structure dominates the Paseo del Prado. This a must see in Madrid.

Built in 1785 to house the Natural History Cabinet.It served as the cavalry headquarters during the War of Independence. It was finally opened as an art museum in 1819. Not only does the Prado have the most complete collection of Spanish paintings in the world but also the finest Flemish, Italian, and French paintings. It contains more than 9000 works of art, including collections of paintings in addition to sculptures, engravings, coins, medals, and decorative arts.

This is our Madrid tourist guide, but there are many other places to see in this city. What are your favourites?