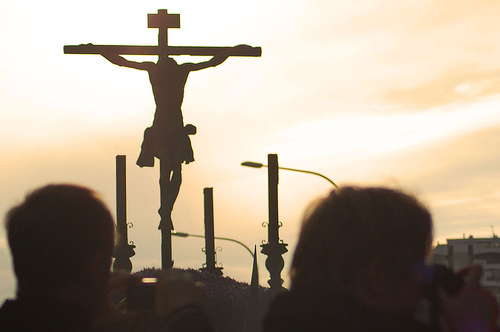 Over five hundred years of tradition, enormous ornately decorated tronos weighing up to five tonnes, penitents wearing traditional robes, processions and an atmosphere very different to other Spanish Easter celebrations are what await visitors to Easter in Malaga 2017 from the 9th to the 16th of April. Every day of Easter there will be processions representing the traditional images of the Passion of Christ.

Since 1980 Easter in Malaga has been considered of International Tourist Interest, the streets are filled with people straining to see and touch the tronos, floats with sacred images of Jesus and the Virgin Mary carried on the shoulders of the penitents. They make their way through the streets of Malaga accompanied by thousands of penitents dressed in elaborate robes carrying candles, incense and flowers.

Normally the Easter processions in Spain are quiet, solemn affairs which invite reflection and meditation however in Malaga the choose to celebrate Holy Week differently and the tronos are met with applause, joy, cheering and impromptu saetas, a style of flamenco sung at processions. Another unique feature of Easter in Malaga are the military processions featuring Parachutists, the Navy and the Spanish Legion.

The procession of the Spanish Legion is one of the most popular and emotive processions during the Holy Week celebrations. The legion accompanies their Cristo de la Buena Muerte, Christ of the Good Death, the Patron Saint and protector of the legionnaires in a horizontal position whilst singing “el novio de la muerte”, the boyfriend of death.

Another interesting tradition of Easter in Malaga, dating back to the 18th century during the reign of Carlos III, is that of Jesus “the Rich”. Every year a prisoner who has shown that they are repentant and demonstrated good behaviour is pardoned for his crimes by Jesus the Rich and released from prison.

Easter in Malaga provides a unique opportunity to see the emotion and religious fervour which greets the processions as they make their way through the city streets, an event to be appreciated even for those who don’t share the same beliefs.