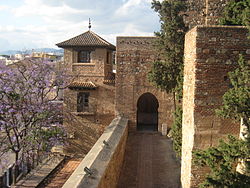 Tourist guide for dummies in Malaga

Malaga, the capital of the Costa del Sol, has a lot to offer. This ancient port founded by the Phoenicians and sought after by the Romans, Arabs and Christians, is today a bright and dynamic city with a fascinating and well-conserved historic district. The beaches, climate, food, architecture, people and art there are only some of its many charms that have made it into a well-loved city. Thus, here is a small guide containing some of the highlights of Malaga so that you can discover the city for yourself.

ALCAZABA AND GIBRALFARO CASTLE – The Alcazaba comprises a Moorish fortification built in the 11th century on an old Roman fortress. Crowned Gibralfaro mountain, it was protected by three concentric walls, two of which have been preserved. The governing Muslims used it as a palace during one of the most magnificent periods in Malaga. Just behind the Alcazaba stands Gibralfaro Castle built in the 14th century to house troops and protect the Alcazaba. Where: C/Alcazabilla, 2. When: You can visit it from Tuesday to Sunday. Price: Entrance to one of the monuments 2.10 euro. Reduced fee 0.60 euro. Combined visits to the Alcazaba -Gibralfaro 3.45 euro.

PICASSO MUSEUM IN MALAGA – Located in a Renaissance palace dating back to the 16th century, this museum houses an extraordinary collection of more than 200 pieces by Pablo Picasso. Paintings, sculptures, engravings, sketches and ceramics span the career of this great artist. You can also admire Phoenician remains of the city inside the museum. And of course, art lovers will love the Picasso Walking Tour of Malaga. Where: C/ San Agustín, 8. When: Open Tuesday to Sunday from 10am to 8pm. Price: Permanent collection 6 euro, temporary exhibitions 4.50 euro, combined visit 8 euro.50% discounts available for children, the retired and students. Free entrance the last Sunday of the month.

ROMAN THEATRE – At the foot of the Alcazaba is the Roman Theatre in Malaga which, despite its size, wasn’t discovered until 1951. It was built during the time of Augusto, in 1AD, and was used up until the 3rd century. The Arabs used it as a quarry and took stone from there to build the Alcazaba. The gallery at the entrance of the theatre has been preserved, as well as part of the orchestra and the grandstands with their corresponding entrance doors. Where: C/Alcazabilla, 8. When: You can visit the theatre throughout the day from Tuesday to Saturday and Sunday morning. Guided tours in the evening are organised over the summer. Price: Free.

MALAGA CATHEDRAL – The Catedral de la Encarnación is one of Malaga’s most important monuments. It was built upon the remains of an old Mosque between the 16th and 18th century thus combining various architectural styles. The tower is unfinished giving the cathedral a little character and earning it the name “La Manquita” meaning one-armed or armless. The sculptures on the choir stalls by Pedro de Mena are particularly worth a visit. Where: C/ Molina Lario s/n. When: From Monday to Saturday. Price: 2 euro.

LA CONCEPCIÓN HISTORICAL BOTANICAL GARDEN – An authentic tropical and subtropical plant garden with fountains and beautiful statues scattered here and there. It is considered the most beautiful tropical garden in Spain and one of the best in Europe. The Marquesses of the Loring household, Amalia Heredia and Jorge Loring, created this exquisite garden in the 19th century which also has a small museum with Roman statues and mosaics. You can also enjoy the stunning views of Malaga on offer from the viewpoint. Where: Camino del Jardín Botánico, 3. When: From Tuesday to Sunday from 9:30am. Price: Normal entrance fee 4.20 euro, children from 6 to 16 and the retired 2.10 euro.

These are of course only some of the interesting things you can see in Malaga. If you would like to discover the city of Picasso in greater depth then there are numerous churches, palaces, parks and beaches to visit. Let your feet guide you!