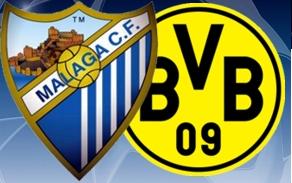 Malaga will face Borussia-Dortmund in the first leg of the Champions League Quarter Final to be played in La Rosaleda on Wednesday 3rd of April 2013. Dortmund will start the match as favourites are playing some excellent football through the elimination rounds off the tournament while Malaga will be out to prove that their presence in the quarter finals is no fluke.

Malaga were outsiders in the group stage but battled through to finish top of Group C, beating Milan out of the top spot. In the final 16 round they came from 1-0 against Porto in the first leg to finish 2-1 on aggregate and book themselves a place in the Champions League Quarter Finals 2013.

Dortmund on the other hand cruised through the group stage finishing top of the so called group of death, above clubs like real Madrid, Ajax and Man. City. They easily overcame Shakhtar 5-2 on aggregate to make it to the next stage, the Champions League Quarter Finals.

Malaga coach Pellegrini has brought together a motivated group of players who will fancy their chances against the stronger Dortmund side. Players Demichelis, Toulalan and Baptista will be able to provide the experience required for these kind of matches while creative mid fielder Isco will provide the excitement with his excellent playmaking and lethal long range strikes.

Dortmund will be troubled by the pace of Isco or Saviola especially if they sneak behind the otherwise excellent dortmund defender Hummels. Going forward Dortmund are very dangerous especially forward Marco Reus and mid-fielder Mario Gotze this will create problems for Malaga. The Champions League Quarter Final between Malaga and Dortmund promises to be an exciting clash. Who will win?

Find out for yourself watching the match from Malaga’s Rosaleda stadium and take the opportunity to explore Malaga, walk in the footsteps of Picasso, see the sights or soak up the sun on one of Malaga’s many beaches.