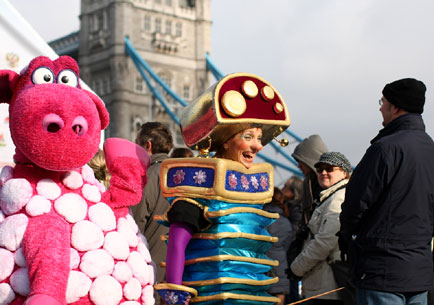 London, the essence of Britishness, the home of her majesty the Queen, and what can we say a cosmopolitan combination and cultural melting pot thanks to which we can all discover many different cultures from all over the world. If you were visiting London in January you may have bore witness to the fabulous and entertaining Chinese New Year celebrations which is an increasingly popular event. Now it’s the Russians’ turn as on the 6th of March London will be hosting the Maslentisa Russian Festival, an age old festival in Russia that marks the end of winter and celebrates the start of spring before Lent, the perfect opportunity to brush up on what may be your non-existent knowledge of this fascinating eastern European country.

Those of you who fancy going can thus expect a true Russian-style celebration giving you the chance to sample the culture, music and food of Russia without even having to board the plane to Moscow! There’ll be a mixture of traditional folk and contemporary music at this event, as well as theatre, food stalls and lots more.

Similarly, the children’s marquee programme will feature special performances by the award winning Theatre Chudaki, a presentation of Maslenitsa traditions with audience participation, performances of traditional songs by children’s groups, as well as competitions and games bound to keep them entertained and out of mischief. Furthermore, around the Square there will also be a range of stalls offering a variety of Russian cuisines and regional delicacies, such as blini pancakes (Russian style crepe containing yeast), something that everyone can enjoy, and finally other kiosks selling traditional handicrafts and souvenirs.

Maslenista 2011 promises to be a spectacular and exciting festival, bringing Russian culture and tradition to the heart of London.

Date: Sunday the 6th of March