May Crosses Festival 2011 in Granada 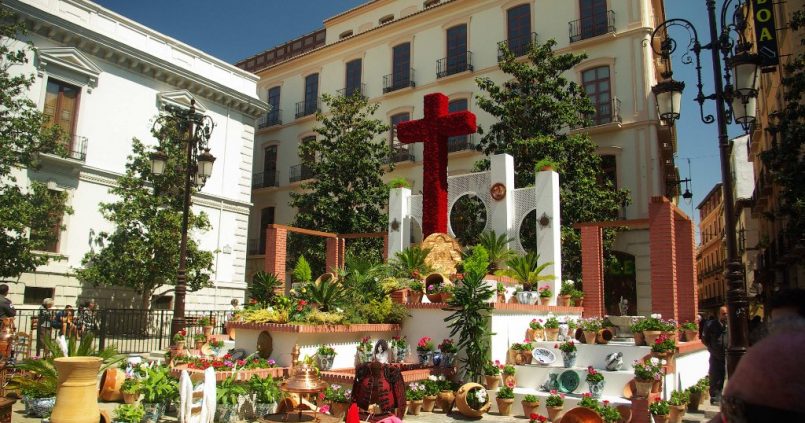 May Crosses Festival 2011 in Granada

On the 3rd of May, Granada will be holding its famous Fiesta de las Cruces or May Crosses Festival 2011. It comprises one of the cities major celebrations and all the streets and squares in the city are decorated with flowers and crosses in line with catholic tradition, in honour of the event.

This tradition dates back to 1625 when a Cross made of alabaster was erected in the district of San Lázaro and everyone started to celebrate with music and dancing under it. It is a religious festival which has gradually extended to the entire city. Thus, an altar decorated with crosses and embroidered shawls is set up on each square, in addition to pieces of pottery, copper pots and open scissors driven into apples and pears. The pear is particularly important as it involves a play on words that is symbolic to the festival.

A further tradition is that of the “chavito”, comprising an old Spanish coin. Children would wander around the city begging for these coins for the Holy Cross. To get them they would have to build their own crosses, identical to those made by the adults and then ask for the money.

All the different areas in the city strive to erect the nicest cross so they can win the prize for the best one, which is quite a big deal given that it is quite a long-standing tradition celebrated by the most devout Catholics in Granada.

A few years back the Granada May Crosses Festival was really well known by Catholics as well as young Spaniards looking forward to days full of crosses, and modern and popular music played in the squares located around the city. They consisted of celebrations full of tradition whereby young people could dance the Sevillana (typical Sevillian dance) and flamenco, as well as enjoy popular music played under the crosses erected in each square, whilst they drank a Pilicrim wine or had beer with some tapas. However, so as to organise the festival a little bit more, over the last few years the celebrations for younger festival-goers have been transferred to the “Botellódromo”, located in the outskirts of the city, offering a more party atmosphere for those who want it, whilst those who wish to celebrate in a quieter and more traditional manner with genuine crosses and traditional Andalusian music may do so in peace in the centre.

There are some bars and pub that make their own crosses, and which offer crosses in addition to all kinds of drinks and tapas together with contemporary music to passers-by. Therefore, the Crosses Festival in Granada continues to be a very attractive event for young people and more traditional festival-goers alike.

It is definitely worth a visit to this Andalusian city, not only to enjoy the Crosses Festival celebrations taking place on the 3rd of May, but also to wander through the streets decorated with the most authentic and traditional symbols to the city.