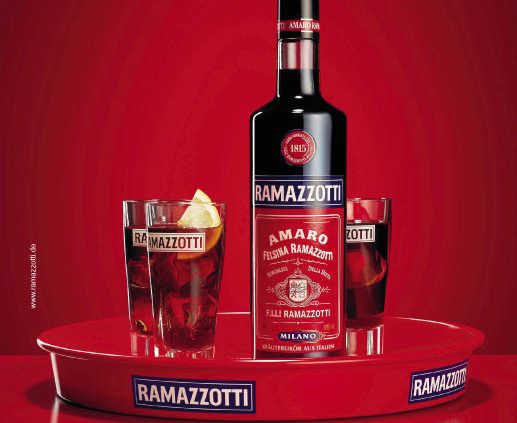 In the world of liqueurs, if there is one country that stands out amongst the rest then it is Italy. In general, out of all those countries that have brought a little elegance and distinction, this country has made the biggest contribution with their undisputable inventiveness and competitiveness. Many of the liqueurs that we drink on a regular basis today originate from Italy and of course Milan, where 3 of the most well-known and traditional Italian drinks and brands were born. We are referring to Campari, Ramazzotti and Amaretto Disaronno.

Campari- The preparation of this delicious aperitif mainly involves the infusion of diverse herbs and fruit such as chinotto (sour orange) in alcohol and water, and it is characterised by its intense red colour. Is it impossible not to associate this famous drink with the cocktail negroni, and for some more knowledgeable cocktail drinkers, Garibaldi, and the Americano cocktail (sweet vermouth and club soda).

The drink’s original recipe is still a mystery, but what we do know is that the original colour was achieved by using carmine from the insect cochineal belonging to the Hemiptera family and originating from Mexico, from which they extracted the crimson coloured dye, carmine. The history of Campari goes all the way back to the 1860s when the inventor Gaspare Campari created this tasty beverage and sold it in his Campari Café. Since then it has not stopped growing, and is now sold in more than 190 countries.

Amaro Ramazzotti- Amaro means “sour” in Italian and is a variety of herbal liqueurs that aids digestion, and which originates all the way from Roman times. It was not perfected until the Middle Ages when alchemists combined alcohol with all kinds of herbs that they administered as a herbal remedy.

In 1815 Ausano Ramazzotti experimented with a variety of different types of herbs and liqueurs in his store located near the Arena in Milan, in his search for an amaro with a smoother taste to satisfy all palates. It was then that he discovered the perfect recipe, a combination of 33 ingredients such as bitter orange peel, star anise, angelica, quina, rose petals, and vanilla…and voila! You have Amaro Festina Ramazzotti, which was an immediate hit with consumers thanks to its digestive properties and its excellent taste.

In addition, Ausano opened an establishment next to the La Scala Opera House, an excellent idea and that launched his drink to stardom. Since then, it hasn’t stopped growing, and Ramazzotti has become one of the top and indisputable leading brands on the Italian and international market amongst liqueurs of Italian origin over the years.

Amaretto Disaronno- And, what about Amaretto? This delicious liqueur which combines the sweet taste of apricot kernels with the bitterness of almonds, together with pure alcohol, caramelised sugar, and the essence of seventeen herbs and aromatic fruits including vanilla and cherry. Disaronno originates from Saronno, a small town near Milan, and from that the reason for which it is known as Amaretto di Saronno.

Of all the well known Italian brands, the most famous is Disaronno Originale Licor, that they started selling in 1817, thus converting it into one of the most well-known and original liqueurs in the world, and whose flavour is so versatile that you can add it to cakes like tirimasu, and drinks such as amaretto sour, and fruit juices, as well as other drinks.