Milan Cathedral, history and art in the heart of the city 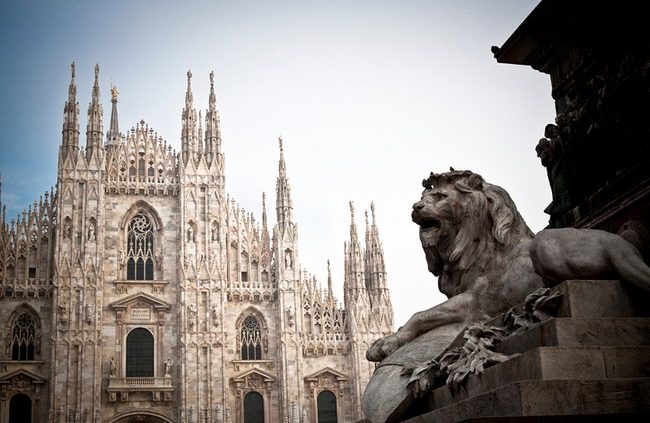 A tour of Milan Cathedral

Milan Cathedral, generally known by its Italian name, Il Duomo, is an immense Gothic cathedral that towers over the city centre and forms the backdrop to countless tourist photos.
One of the largest cathedrals in the world, it can accommodate over 40,000 people. It has five broad naves and three in the transept, where the varying heights create an interesting play of volumes.

Work on Milan Cathedral began in 1386, thanks to Archbishop Antonio da Saluzzo, and it was completed in 1806. It brought together architects from France, Germany and Italy and is the only Italian church in pure Gothic style.

The outside is clad in white marble and it is crowned by a host of towers, pinnacles and statues. In total there are 53 adorned pilasters, 135 spires and 2.245 statues. Its highest point, 108 m above ground level, is crowned by a golden copper sculpture known as La Madonnina.

Milan Cathedral houses a major collection of artworks, including several sarcophaguses and three altars by Pellegrini. There are also a number of sculptures of saints, the most famous of which is Marco d’Agrate’s gruesomely realistic Saint Bartholomew Flayed.

One of the great attractions of Milan Cathedral is its publicly accessible rooftop, where you can admire the forest of spires and sculptures up close, as well as enjoy stunning views over the city.
The crypt houses the Chapel of Saint Charles Borromeo, including his holy relics, and the Cathedral Treasury. Another relic, a nail from Jesus’ cross, is in the dome behind the main altar.

Posted in Milan, Things to do in Milan
Marketing Team