More concerts in Barcelona with La Mercè 2010 and the BAM 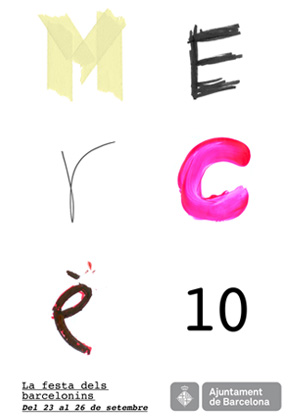 Like every year, the Festival of is held around September 24, the day of ‘s patron saint, the Virgen de year between the 23th and 25th of September many traditional events are to be carried out. They will take place throughout the city to commemorate their patron, such as the Barcelona Arts de Carrer, the Festa de (with castellers, figures with huge heads, giants and beasts), the Festa al Cel (meeting of reactors, balloons, ultralight …) or the Festa del Foc (with pyrotechnics and correfocs) and the Barcelona Acciò Musical (BAM).

The Music i BAM, is a reflection of the cultural and music diversity that characterizes . This initiative framed within the festival of , includes a series of concerts aimed to all type of people, and the BAM is part of it. The latter is an independent music festival both with Spanish and international bands and this year as usual it brings the top of the current music scene. The richness of the line-up is reflected in the varied free performances scattered over traditional stages such as the Parc Forum, the Plaza Real and those recovered for this edition such as the Plaza de and the Plaza de Joan Corominas.

The line-up of this year’s edition is not yet fully completed, but with the artists so far confirmed, it stands out as one of the best music events in . Thus, on September we can enjoy the performance of the British band Goldfrapp, who will present in their latest album Head First, with a very 80’s sound and where Alison Goldfrapp’s great vocal range continues to amaze us. Furthermore, the line-up counts with artists so far confirmed such as Maika Maikovski (known as the Pj Harvey from Mallorca), Tulsa (folk-rock band led by singer / songwriter Miren Ize), El Guincho (which promises a performance full of electronics, pop and tropical sounds, San Leon (with their dynamic pop with touches from Africa), Nueva Vulcano (rock with strong poetic lyrics), among many other artists already confirmed and to be confirmed.

We will keep you informed about future bands joining the excellent line-up of the BAM. However, with these confirmations you can get an idea of the quality of the music offer that awaits us in between the 23rd and 25th September.