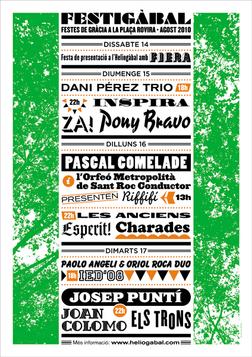 The Festa de Gràcia (the popular party of the Gracia District) has already kicked off and along the week visitors will be delighted with the many colours that fill the streets and the cultural and gastronomic activities that abound in every corner of the neighbourhood of Barcelona.

However, this festival also lauds music and as such, many concerts are organized on the streets or in the open enclosure of the Cloister of the Oratorio San Felipe Neri. But in parallel and framed in this festival it is also celebrated the Festigabal 2010, a musical event without a big budget but with a clear aim, to contribute to the soundtrack of the popular festival of Gracia with both local and national bands.

Since the events kicked off last Saturday and until tomorrow August 17, visitors can enjoy various performances in the Rovira Square. Today, it is expected the performance by the Barcelona band Pascal Comelade, who will play with the Metropolitan Orchestra of Sant Roc Conductor, playing together with the pianist Ceret in a tour through the best 20 rock songs. More bands from Barcelona are taking the stage this evening, such as Les Arciens and Esperit! In addition to that, the Madrid band Charades is invited to present in Barcelona their bright and elegant pop accompanied by guitars and xylophones.

On Tuesday it is expected the performance by the duo from the Island of Sardinia, Paolo Angeli & Orial Roca. Apart from them, the band from Barcelona IED’08 and Josep Punti, the former leader of the band Umpah Pah, and later Joan Colomo (one of the most brilliant and innovative singers on the spanish music scene) are taking the stage. And the latest band to play is Els Trons, who will make everyone dance to the rhythm of their garage punk sound in Catalan.