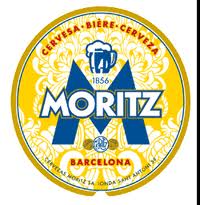 Moritz is a Catalonian beer brand that was founded by a French immigrant named Louis Moritz Trautmann in 1856. The beer was initially brewed in a small factory in El Raval, Barcelona. After eight years the brand started to grow bigger and the factory moved to a larger brewery at Ronda de Sant Antoni. Here the brand build off a big reputation and in 1966 production moved to Parets del Vallès. With a market share of almost 40 percent, the Moritz family decided to merge with another beer producer to enlarge production, the new company Beers Barcelona was born. Instead of expanding, the Mrits family was soon forced to sell theit due to the oil crisis in 1970. The beer brand Moritz finally went bankrupt and disappears in 1978.

In 2004, the children of the latest Moritz brewers generation, decided to re-launch the brand and start all over. They restarted on the same place Louis Moritz founded the brand in 1856 and build it of successfully. Nowadays the brand is slowly winning terrain in Barcelona and their fully renovated office is located in the old brewery, together with a beer museum and storage. Production is moved to Aragon Zaragozana in Barcelona. So when you’re in Barcelona and you fancy a beer, search for the Moritz logo and taste Catalonian history.