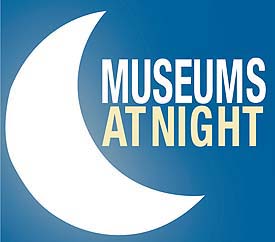 The Long Night of Museums London 2012

Once again in 2012, the elusive Museums at Night will be stealthily creeping through a range of countries under a variety of names. Also known as “White Night”, “The Night of Museums” and “The Long Night of Museums”; this year the cultural event will take place in over 120 cities in Europe, from London to Paris and Berlin. Even cities outside of Europe, like Buenos Aires, have cottoned onto the idea

If you hadn’t already heard of Museums at Night, the concept is fairly simple. To expand their potential client range, museums, galleries and other cultural institutions open their doors until the small hours, and put on special activities such as performances, tours, workshops and storytelling sessions to bring in the punters.

In the UK this year, Museums at Night London 2012 is taking place all over the country on the 18th to the 20th May. In the British capital, all the major galleries and exhibition halls will be participating, including the Museum of London, the Bank of England Museum, the National Gallery, the Design Museum, the British Museum and many others.

Even if you haven’t been in a museum since you were at school, there’s something here for everyone. For a romantic night for two, “A Night in Space” in the Greenwich Royal Observatory (a.k.a. "the place where time began") will be once again putting on planetarium shows. Although Greenwich is a bit of a trek out, in previous years these have been truly spectacular and well worth the journey. To get the little’uns involved in cultural activities from a young age, we recommend “A Victorian Delight” in the opulent Leighton House, which promises “…a special night as you step back in time”. Museums at Night is also a great event to wander through of your own accord: who couldn’t fail to be inspired by the Christian Louboutin exhibition at the design museum, or Friday Late Life Drawing at the National Gallery?

Whichever exhibitions you decide to visit, you’ll be surprised by how much the atmosphere of an exhibition changes at night. From the somniferous to the spooky, in the museums of London you’ll find it all on the 18th to the 20th May.

Information and competitions for Museums at Night, London

Some events are free, whereas some charge for entry. Be warned: it’s often necessary to reserve places. All details of times, locations and prices can be found on the official website.

Here are two competitions for Museums at Night that you might like to try your luck at:
Faber and Faber
British Museum (children only)

Posted in Art and Museums in London, London
Marketing Team