Music Festival in Berlin, the MaerzMusik 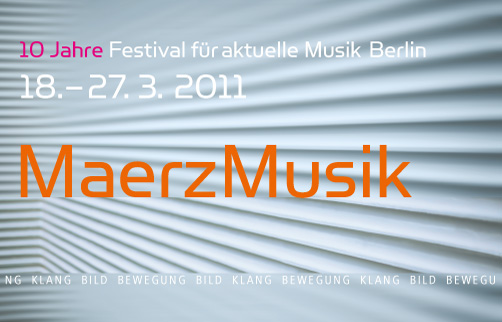 Fans of classical music will now be able to enjoy 10 whole days of non-stop music thanks to MaerzMusik in Berlin, that is none other than a music festival taking place from the 18th to the 27th of March. Spectators will get the opportunity to listen to compositions from contemporary artists, including German and international musicians.

The MaerzMusik 2011 programme has performers lined up that attempt to converge moving sounds and images. Thus, festivalgoers can expect a combination of new music with old films, musical video art and some experimental intermedia performance installations. The festival will be opening with a venue-specific version of Rebecca Saunders’ Chroma in the MOSKAU. Not only do the musicians continually change their performance position, but the audience is also free to move around and individually experience the work.

Entrance prices vary depending on the type of performances you’re interested in. They are divided into 7 different categories with the following prices:

GroupC:15 € in the Babylon concert halls as well as Radial System V, Sophiensaele, the TRAFO, and the Universität der Künste Berlin

Group D:12 € in the Berqhain, in the Hamburger Bahnhof – Museum für Gegenwart, in the Jüdisches Museum, in the MOSKAU, the Sophienkirche church and in the Universität der Künste Berlin

You can get tickets at the following sales point:

You can also get tickets at normal sales points in Berlin, in addition to the bars and concert halls themselves before the beginning of each performance. Furthermore,discounts are available for students and large groups if there are any remaining tickets.

Posted in Art and Museums in Berlin, Berlin
Claudia