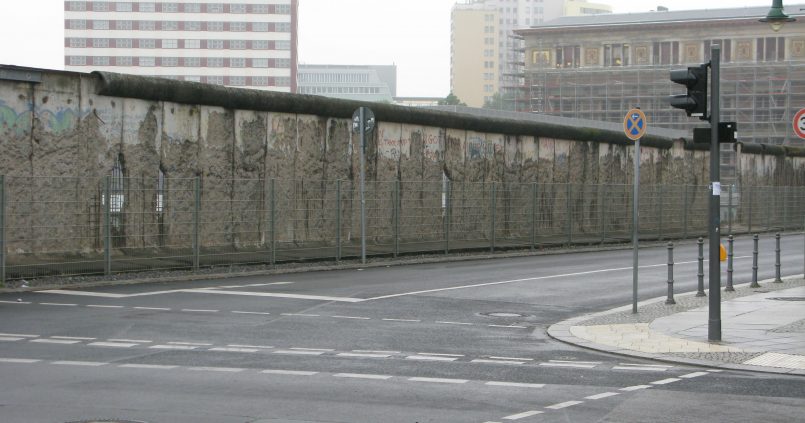 I’d been looking forward to going to Berlin for a long time. Everything I’d heard, read and researched about the German capital only piqued my interest…the nightlife, the architecture, incredible city vibe and of course the Wall. Yes, it was the wall or the remains of it, I most wanted to see. I’m old enough to remember when it was torn down and the images on the television of Berliners hugging each other and celebrating are something I’ll never forget. I’d come to Berlin to see the Wall first and everything else second.

On my first morning in Berlin I braved the cold and walked along the banks of the Spree River or one of its offshoots to the East Side Gallery. After mistakingly entering a nightclub which had just closed and a few more wrong turns I turned a corner and there it was, the Berlin Wall. I wandered its length admiring the graffiti and trying to understand everything the wall stood for. Try as I might I was unable to get a true feeling as to how the wall affected the day to day life of the people living in its shadow. Sure it was big and divisive, but since it was covered in graffiti with a road on one side and a river on the other I just didn’t see it as a something which divided a city in two. To me it was more a fantastic outdoor art gallery than anything else.

Later that same afternoon I visited the Topography of Terror where there is a 200m long remaining section of the outer wall. The Topography of Terror is a museum on the former grounds of the Gestapo and SS headquarters and shows the crimes perpetrated by the Nazis during the Third Reich. Of the many photos in the exhibition there is one which stays with me, it’s a photo of a group of Auschwitz guards enjoying some time off. Their smiling faces and playful poses are at odds with the daily acts of horror they committed. I think I remember this photo more than the others because of the questions it raises about the darker side of human nature. Did they agree with what they were doing? Did they feel guilty? How can seemingly ordinary people commit such horrible crimes? Now, it’s too late to ask them.

The Wall along Niederkirchnerstrasse looked as if it had been attacked with hammers and picks leaving gaping holes big enough for someone to pass through. It was easy to see the hate and anger directed at the Berlin Wall, I mean it’s no easy task knocking a hole through reinforced concrete. I could imagine East and West Berliners reaching through and shaking hands with those on the other side. For the first time I began to get an inkling of how living with the wall really was and how much it was hated. After the first day I could say I’d seen the Berlin Wall but hadn’t fully understood everything it stood for.

Have you visited the Berlin Wall or Topography of Terror? What were your impressions?

You can read the follow up to My Berlin Wall Experience here.