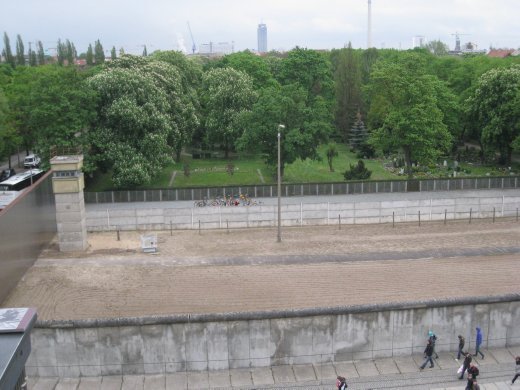 The following morning dawned cold and wet, jumping on a tram I went to explore the flea market in Mauer Park. Along the way I met a young Berliner who not only helped me with a tram ticket but also gave me some very good advice, he told me I should check out the Berlin Wall Memorial along Bernauer Strasse once I’d finished at the market. So after wandering the market I headed off down the Bernauer Strasse. It was here I finally got to see the full effect of the Berlin Wall and an understanding of how it divided the city.

Bernauer Strasse was and is much like any other street in Berlin except the Berlin Wall divided it clearly in two. In fact the border was at the front door of many people’s homes, walking out their front door they would be in West Berlin, in the rest of the house in East Berlin. From one day to the next, neighbours, friends and family were separated by a boundary then later a wall. I was beginning to understand the devastating effect the Berlin wall had on the local community.

The Berlin Wall Memorial is divided into five sections, coming from Mauer Park I started at the final section. Each section is dedicated to different subject, Area A is probably the most chilling of all the sections here you can see the last remaining section of the wall much as it would have been before it was torn down including the much hated and incredibly lethal death strip. It also documents how a cemetery was dug up and the bodies relocated to make way for the wall. However all of this is overshadowed by the ‘Window of Remembrance’, a large steel window frame with photos of the people who died trying to escape East Berlin, victims aged from one year to 60 years of age. Area B of the Berlin Wall Memorial shows the human cost of the wall with families, neighbours and friends separated by the wall. It also shows the desperate lengths people took to escape including leaping from windows into the waiting nets of the West Berlin fire department, tunnelling under the wall and other ingenious methods of escape. At each site there are audio and video stations where you can listen to the accounts of residents who escaped and detailed history about the wall. What remains of the Reconciliation Church can also be found here, the church had stood abandoned in the middle of the border strip was reduced to rubble in 1985. All that remains today are the church foundations and the memorial.

Area C of the Memorial examines two different topics, the first being the construction of the Wall and continual improvements made to prevent people fleeing to the West. The video at the station show how each escape was carefully analysed and improvements made to the wall based on the findings of the analysis. In true East German fashion gymnasts and soldiers tested the improvements, vaulting and climbing the wall. Remnants of the anti vehicle obstacles are also on display here.

It was after visiting one of Berlin’s best flea markets on a cold a wet day and following the advice of a local that I finally had an understanding of the effect of the Wall on Berlin. I could clearly imagine a wall being built outside my own house, the square I go to everyday would be off limits, the conversations I have with a neighbour would cease, many of my friends would be on the wrong side of the wall or maybe I would be. My visit to the wall was a sombrous experience and left me thinking if we really do learn from mistakes made in the past.

Have you visited the Berlin Wall Memorial? What did you think?