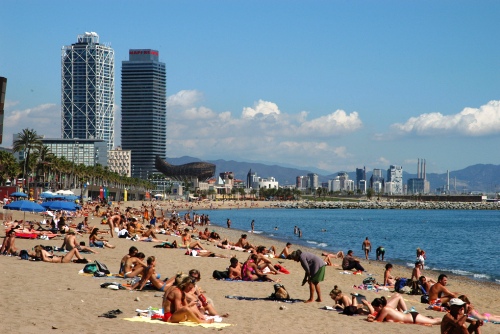 My fellow visitors, foreigners, and nationals, we are sad to announce that from now it is strictly forbidden to wander the public streets of Barcelona in your bathing suit or the nude. Yup, although it seems like a joke up until now thanks to municipal legislation Barcelona had a much more relaxed and tolerant attitude with regards to strolling half naked down the streets of the city.

In summer it is very common to see tourists, especially from northern Europe cheerfully wandering the streets in Barcelona centre in a bathing costume or bikini and that was normal, acceptable behaviour for some, however it has also been the cause for protest by a more conservative sector of the city.

This group has taken a 180 degree turn in their civil politics and recently passed a more restrictive law which they justified by claiming that “it has been passed to protect peoples’ rights and as consequence of the lack of respect by others for the minimum dress requirement guidelines”.

So, what will be the consequences of this new law for tourists and visitors that come to visit Barcelona in summer? Well, if they walk down the streets in a bathing costume in the centre or public spaces they will be subject to a fine ranging from 120 to 300 euros, so we’re not talking about a trivial little sum here. As stated in the new law this is based on “protecting people and their right to not being upset by those who do not respect the minimum dress requirements”.

Therefore, it is strictly prohibited to wander the streets half dressed or in the nude in public spaces, aside from when special authorisation has been given for certain public places. It is also forbidden to walk around or be in public spaces in your bathing costume, apart from at a swimming pool, the beach or any other place where dressing as such is considered acceptable. The law does not apply to beach promenades or those streets located directly adjacent to the beach. Thus, lawbreakers will be fined 300 to 500 euro for not keeping their kit on in public spaces, whilst a fine of 120 to 300 euros will be handed out for half naked displays on the streets. Either way, offenders will first be given a warning but won’t be so lucky the next time.

So, what do you think about this new law? Do you think its such a bad thing to wander the streets with your shirt off in summer? Should we be fined for being inventive about trying to keep cool? Either way, the law won’t come into effect until March, but take care on your wanderings around the city because its better to endure the heat with your wallet intact than take of your shirt and pay a fine exceeding 100 euros.