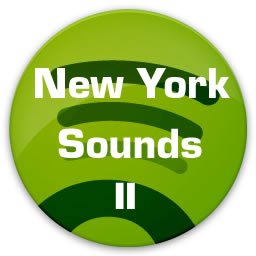 Summers not over yet, and even though it’ll soon come to an end we’re hoping that the warm weather will stick around for a little bit longer. In any case, we still post our weekly Playlists as there are many cities with a rich musical background thanks to their diversity and personality. This week we have decided to fix our eyes upon the capital of the world once again, New York.

Our New York Sounds Playlist II attempts to reflect the enormous variety that characterises the cosmopolitan town of New York on a musical level. Thus, we have included the freshest sounds on the New York scene, as well other groups and singers typical of this great city. Thus, we included the legendary group Sonic Youth and the melancholy singer Fiona Apple, whose musical talent and vocal ranges have been demonstrated throughout their intense musical careers, in addition to the legendary group of the 90s, "Nada Surf" with their famous song Popular.

However, the freshest and very latest music on the international music scene comes from those groups with New York roots. The Pains of Being Pure at Heart, The National, Sleigh Bells, The Phenomenal Handclap Band, amongst others included are the cream of the cream of this music scene. Of course, we have also included Antony and the Johnsons whose ethereal sounds and lyrics resulting from the incredible musical and vocal combination of Antony Hegarty transport the listener to indescribable, but beautiful worlds.

Many of the groups with electronic sounds that comprise this music scene, Radio 4, The Hundred in the Hand, or The Terror Pigeon Dance Revolt ascribe to these latest sounds, but adding a New York touch to it.

Finally, although Frank Sinatra was not originally from New York, one of his legendary songs are dedicated to this great city thus his ode to the capital of the world has been included in our humble collection of songs. These groups and more form this New York Sounds Playlist II that aspires to present a more complete image of the New York music scene.

The Hundred in the Hands – Sleepwalkers

Zigmat – Light of the Moon

Radio 4 – Dance to the Underground

Hazy Malade – Looking out of you

Fiona Apple – Fast as you can

Antony and the Johnsons – Hope There’s someone

The Pains of Being pure at heart – Young adult friction