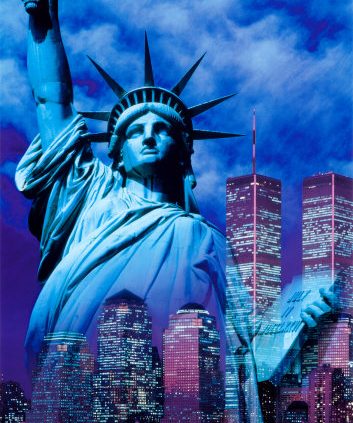 Welcome to our New York Edition of Friendly “Tourist attractions for dummies” where we have filtered, flicked through, and sorted the abundance of things to do in New York to finally present you with a list of the 5 top things to in the city that never sleeps, so that you can make the most of your holiday. Our selection comprises some of the most famous tourist attractions and locations that constantly crop up in the media, that host an array of seasonal events and festivals in this great city, and which finally you have undoubtedly heard of before but just need a little guidance. Well, as we’re always happy to help, take a quick look through our humble suggestions.

The Statue of Liberty

This Lady requires no introduction whatsoever. This famous statue, which has become synonymous of this great city, is located on Liberty Island on New York Harbour. A gift from France in 1886 as a gesture of friendship between the two nations, Lady Liberty is a symbol of political freedom and democracy, and commemorates the date of the United States declaration of Independence. This torch bearing icon is accessible by the Circle Line-Statue of Liberty Ferry, Inc Ferries only, and a round trip of the Liberty and the Ellis Islands is all included.

This famous national landmark and historic building is a 102-story Art Décor skyscraper in New York, which stood as the world’s tallest building for 40 years, a title which it has since reclaimed following the destruction of the World Trade Centre. The Empire State building can also boast as being the first building to have more than 100 floors, and rises more than 1,250 feet into the atmosphere above the bustling New York streets. The Observatory located on the 86th floor offers a spectacular panoramic view of the city from within a glass –enclosed pavilion, and the surrounding open-air promenade making this one of the most popular New York tourist attractions for visitors.

Located on the legendary 42nd street, Times Square is a major intersection in Manhattan, and is defined by its lights and animated advertisements. It is the heart of Broadway, and hosts a countless number of festivals, events and huge New York gatherings including the famous ball-dropping ceremony ushering in the New Year. Filled with neon signs, screaming ads, and giant screens, Times Square is aptly named ´the Crossroads of the World`. Stop by the Times Square Visitors Centre to get free information, maps, and brochures to see what’s on.

Central Park extends from 5th to 8th Avenue, and is home to a wildlife sanctuary, lakes, playgrounds, skating rinks, and lots more. It is very famous and has appeared in many films. The most popular way of seeing the park is from a horse-drawn carriage, however two or four hour private walking tours of the park are also available. Popular events during the summer include open-air theatre and even performances from the New York Philharmonic Orchestra, as well as free dance and music performances, and film presentations making Central Park one of the city’s most scenic and beloved attractions.

Rockefeller_Center is the hot-spot for exquisite shopping, fine dining, and great entertainment. Situated in the heart of Manhattan, Rockefeller comprises a huge complex of 19 commercial buildings spanning between 5th and 7th Avenue. It houses the NBC studios, and at Christmas time it is completely transformed into a virtual winter wonderland with the stunning and rather famous Rockefeller Christmas Tree, an abundance of sparkling lights and decorations adorning the centre, and an ice-skating rink which is a favourite amongst visitors and locals alike.

That appears to be plenty to go on for now, but keep an eye out for our second edition of “New York Attractions for Dummies” because there’s just so much on in this great city, and we don’t want you to miss out. Also, check out our other New York blogs for recommended restaurants, things to do this season, nightlife, and more. Enjoy!