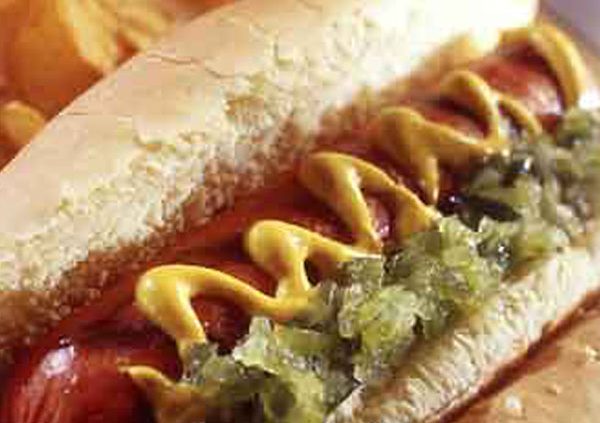 New York, home to sky scrapers, the Statute of Liberty, theatres along Broadway and two of the world’s most famous fast foods, hamburgers and hot dogs. It is precisely the latter of the two which is the focus of today’s post. Because no visit to New York is complete without having wandered through Central Park or having eaten a hot dog. The Frankfurt came to the United States with the German immigrants during the 19th century but the hot dog as we know it today didn’t come about until 1867. The honour of inventing the modern day hot dog goes to Charles Feltman (round of applause) who had the visionary idea of placing the frankfurt in a bun and selling them at Coney Island. Success was immediate and soon he wasn’t the only one selling frankfurts in a bun. Today you can find hot dog carts on almost every corner of New York and whilst they may be good for a quick and cheap feed they really aren’t that good so if you are looking for a more substantial hot dog of far superior quality here are our recommendations of where to get the perfect New York hot dog.

Nathan’s Famous Hot Dogs-Every fourth of July this long established hot dog restaurant hosts a hot dog eating contest. Where contestants pretty much inhale as many hot dogs as they can in a set time, the record currently stands at 69 hotdogs in 10 minutes, but we suggest that you take your time and you really only need to eat one or two of their delicious dogs. Where: 1310 Surf Avenue.

Papaya King- Another famous New York Hot dog restaurant. Famous not only for the incredible hot dogs but also for the delicious tropical fruit juice and of course their fries and onion rings. Where: 179 East 86th St.

Gray’s Papaya-It seem the tropical fruit, papaya is popular in New York especially when combined with hot dogs. At least when it comes to naming restaurants, because we have another restaurant serving awesome hot dogs with tropical fruit juice. Fruit juice wouldn’t be our first choice for liquid refreshment but when in Rome. Where: 2090 Broadway- 72nd St. Crif Dogs- If you would like to try the humble hot dog but with a twist then you can’t go past this place. What sets Crifs apart from the competition is the enormous amounts of different sauces and toppings among them chilli, jalapeños, avocado and teriyaki sauce. Where: 555 Driggs Avenue.

Katz Delicatessen-If for whatever reason you have an aversion to the typical hot dog then you need to pay a visit to Katz. Why? Simple they have kosher hot dogs made from beef and not only that, they also have another New York staple the pastrami on rye. Where: 205 East Houston Street.