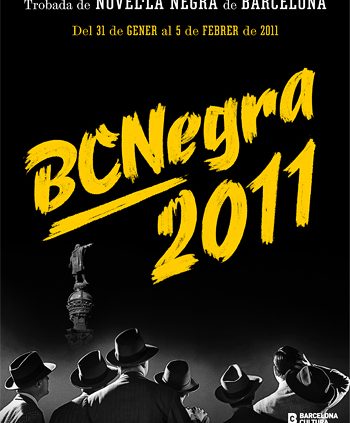 On the 31st of January the literary gathering “Novela Negra” (crime fiction), BCNegra, an event that explores organised crime, the new voices in British and German crime literature, and the dark past of the Catalan capital will be kicking off in Barcelona. This year star guest judge Baltasar Garzón will be attending who together with former director of public prosecutions of the High Court of Justice of Catalonia, José María MENA, will be revealing the reality of organised crime and the political and economic power of new crime organisations.

Judge Garzón’s contribution to the event will be taking place in the City Hall Saló de Cent prior to the culmination of the literary gathering on the 4th of February. However, guest speakers from other countries with a great crime fiction tradition, i.e. Germany and Great Britain will be attending over the few days that “Novela Negra” will be held.

In the first group, we will be able to enjoy the presence of popular novelists such as Johan Theorin, in addition to other German guests. Thus, Tuesday the 1st of February will be dedicated to German crime literature with the presence of Zroan Drevnkar and Volkr Kutscher. In addition, the “black” history of Barcelona will also be on the agenda with a conference led by Javier Calvo, Xavi Casinos, Jordi Solé and Sergio Vilasanjuán.

On Wednesday the 2nd of February, British literature will be the topic of the day and given that Agatha Christie has been dubbed the Queen of Crime novels, this conference is guaranteed not to disappoint. Thus, on the 2nd of February R J Ellory and David Pearce, one of the top British crime fiction authors will be participating, in addition to Craig Russell who will be presenting his latest novel “The long Glasgow kiss”.

On the first day of the event, the 31st of January to be more precise, those attending will be able to bear witness to specialists from the national police force putting together an identikit picture, in addition to see an exhibition dedicated to Joaquim Carbó (young adult crime novelist) and attend the first screening of a film based on the adventures of Pepe Carvalho, in the Filmoteca de Cataluña.

Furthermore, Andreu Martí, creator of detective Flanagan will be receiving the most coveted prize of this literary gathering as he will be featuring as the missing person in a mystery game taking place throughout the week during which his followers will have to decipher a series of clues distributed in the Raval district to find him. Finally, those who love drinks that are indisputably associated with the world of crime and detective novels will get the opportunity to try a selection of special cocktails in restaurants associated with this initiative, and which will be on offer in participating bars from the 31st of January until the 5th of February.

Here is the BCNegra 2011 official programme.