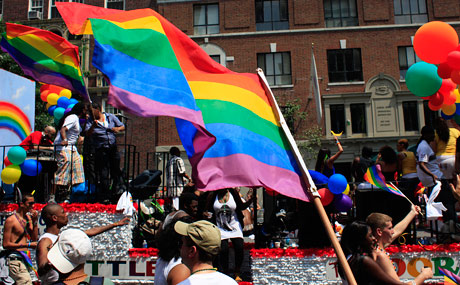 It is one long rainbow coloured weekend in New York when the annual NYC Pride celebrations roll around. The streets are filled with people who come to celebrate Gay Pride and to continue the struggle for gay rights not only in New York but around the world. This year NYC Pride will be on the 28th, 29th and 30th of June 2013.

NYC Pride kicks off on Friday the 28th of June with The Rally; the first rally took place in 1969 and attracted 500 people, today the rally attracts thousands of people who come to listen to the motivational speakers and listen to some great live music. This year The Rally will take place at Hudson River Park’s Pier 26 on West St in the TriBeCa district from 7pm to 10pm. This event is free.

The next events on the NYC Pride calendar are the VIP Roof Top Party and Rapture on the River. The Roof Top Party gets underway at 2pm and features top DJs, Serving Ovahness, Marco Da Silva and Frankie Knuckles, excellent views of New York, three incredible levels and a hot crowd ready to party under the sun all day long. Where:Hudson Terrace 621 W. 46th St.When: Sat. 29th of June, 2pm-10pm. Tickets: Click here for Tickets

Rapture on The River is NYC Pride’s dance event especially for women and this year will be celebrating 10 years. More than 3000 beautiful women will be there to listen to DJ Dimples warming up the crowd before DJ Whitney Day brings the house down with some massive tunes. Where: Hudson River Park’s Pier 26, West St. TriBeCa. When:Sat. 29th of June, 3pm-10pm. Tickets: Click here for Tickets

The big event of NYC Pride is The March, first held in 1970; it has become an annual civil rights demonstration, more than that it has become a celebration of the lives and community of gay people. During The March the streets of New York are rainbow coloured as more than one million participants and spectators come to celebrate gay pride. Expect to see outrageous costumes, colourful floats, great music and an incredible party atmosphere. The parade starts at 12pm from 36th and Fifth Av. For the parade route click here.

Other events occurring at NYC Pride include Pridefest, Dance on the Pier and Pride Poolside. For more detailed information about these events visit the official NYC Pride webpage. Get your rainbow on and head to NYC Pride celebrations it promises to be an amazing weekend.