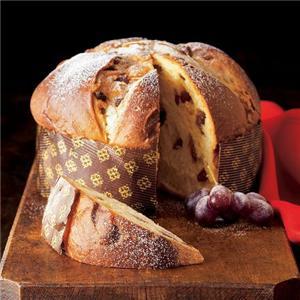 Christmas is approaching and winter is definitely in the air. Everywhere we look we can see evidence that Christmas is on its way as the streets are starting to be flooded with festive lights, the shop windows are beautifully decorated and all the bakeries are starting to prepare typical sweet treats. In Milan, similarly to many other countries in the world, the supermarkets and shops are bombarded by families. Everyone wants to win over their loved ones by their stomachs and Christmas sweet treats never fail. Here are some of the typical Christmas treats in Milan.

Panettone, a typical dessert from Milan, has become the centrepiece on all tables in Italian households over the Christmas period. It is a type of sweet bread loaf made with cured dough containing water, flour, butter and eggs. Candied fruit is added such as lemon and orange zest, as well as raisins. Panetonne is well-known for its cupola shape, smooth structure and cracks on the crust with almonds and crystal sugar sprinkled on the top.

Panettone was born in Milan in the times of Ludovico Sforza, 500 years ago and the recipe still remains the same today. Despite it being made with the same ingredients in the same way, its origins are uncertain. One of the most popular legends is that Panettone was discovered by accident. The chef in charge of Ludovico’s Christmas banquet forgot about the dessert in the oven and burned it. The kitchen assistant, who had prepared a cake that morning using what was left in the pantry, suggested that it be used instead. The diners loved it and the Duke himself wanted to know the name of the dish. The chef named it “il pan de Toni” (Toni’s bread) after his assistant, and from that day on, panettone has graced the tables of Italian families in Milan and all across Italy every Christmas.

Another firm Christmas favourite amongst the Italians is pandoro de Verona not only for its original star shape but also because it’s a great alternative to panettone. It has a smooth and golden surface and doesn’t contain any candied fruit or raisins, which children don’t often like.

The most typical pandoro is completely covered in icing sugar, however, many bakeries, confectioners and brands fill them with different creams and chocolate for those with a sweet tooth.

Hard or soft, with or without almonds, original or covered with chocolate, torrone is another guest of honour in Italian households. Turrone is typically made of egg white, honey and sugar, toasted almonds and other nuts with thin unleavened bread at the top and bottom. Similarly to panettone, the origin of turron has been lost over the years.

Many studies maintain that this dessert originates from the Near East and that it was the Arabs who introduced it to the Mediterranean. It thus comes as no surprise that the Spanish also traditionally have a selection of torrone on their tables at Christmas.

Italians, however, like to believe that it originated in Milan. We need to go back in time to understand why. In 1441, it was declared that Francesco Sforza and Bianca Maria Visconti were going to get married in Cremona. In honour of the event, it is said that for the wedding party, a dessert was prepared imitating the form of the Tower of Cremona and that it was named “Turrone” after the bell tower itself. Regardless of whether it’s Arab, Spanish or Italian, turrone is one of the Christmas favourites and is popular amongst many.

Have a sweet and tasty Christmas in Milan