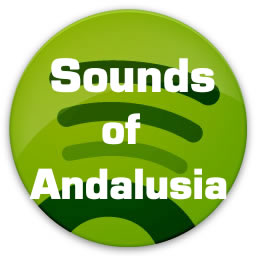 Andalusia is a very varied community with very diverse sounds. Groups of all different music styles are continually emerging and combining and channelling traditional andalusian music with a musical diversity that characterises this southern community. As we like to do every week, we are reflecting upon the sounds of Friendly towns and regions so this week we’re focusing on the community of Andalusia where there is a large number of musical groups mainly from the more cosmopolitan towns, Sevilleand Granada.

Traditional andalusian music has strong flamenco roots, song of the outcasts (flamenco music) and the Spanish guitar, the reason for which we wanted to include some of the most nationally distinguished andalusian artists such as Paco de Lucía, the legendary Camarón de la Isla or great Spanish guitarist Raimundo Amador, who performed the song “So Broken” with Icelandic singer Björk. Similarly, the group “Chambao” originating from Malaga, has drawn from their musical roots and transformed the traditional sound to flamenco-chill out that has catapulted them to fame.

However, Andalusia isn’t just about Flamenco, andalusian rock is thriving and as heirs of this rock tradition, groups such as Niños Mutantes, Lagartija Nick, the famous bands from Granada Los Planetas, 091 and La Guardia or the comical Mojinos Escozios have emerged over the past few years. Now, the next generation of rock bands has taken over such as Lori Meyers from Granada and Sr. Chinarro or Montevideo from Seville. In addition, Supersubmarina from Cordoba and the singer Vega with more of a pop sound have appeared on the music scene, whilst the Costa del Sol, Malaga has churned out the singer-songwriter Annie B Sweet who has won over the public and the most difficult of Spanish music critics with her unique folk, indie sound.

Andalusian diversity is also manifesting a more hip-hop sound such as demonstrated in music by the famous Mala Rodríguez herself, whilst a new wave of artists in love with Black Soul such as Al Supersonic & the Teenagers from Granada are Andalusia’s maximum exponent on a national level.

All of these groups and more comprise our Andalusia Sound Playlist paying homage to and demonstrating the diversity and quality of andalusian music. Listed below is a complete list of andalusian groups and singers.

Al Supersonic & the Teenagers – Lean on Me