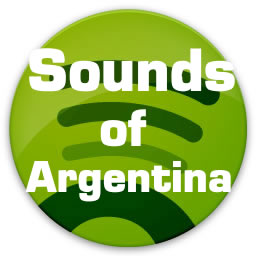 Along the summer and every week we have kept on stopping in different Friendly cities and countries in order to get to know a bit better the music that characterizes them, and therefore, today we turn our attention to Argentina, which is not only the land of tango. As a multicultural country marked by its history and the constant movement of immigrants from all parts of the world, its music draws from each of the different cultures that make up its personality.

Thus, its current music is characterized both by a strong rock accent, as well as by a most romantic and mellow pop, so characteristic of the South American countries. In any case, their music is a mixture of very different styles but whose convergence gives rise to a very typical Argentinean sound.

In our Play list Sounds of Argentina are included some of the most representative bands within the Argentinean music scene such as Los Rodriguez, who marked an entire generation on both sides of the Atlantic and its predecessor band Tequila. The former leaders of that band, Andres Calamaro and Ariel Rot, started getting similar success in their individual artistic path both in their native country and in Spain. We can not forget the great genius of Argentina, the father of tango, Carlos Gardel, whose music inevitably captivates us due to its timelessness and beauty.

A classic rocker native of Argentina is Charly Garcia, and in this sense also very well-known is the band, Ratónes Paranóicos. In the most current music scene we found the bands Attaque 77 or Artesanales. Within the pop scene, Argentina can boast about bands such as Gustavo Cerati, Diego Torres (with a touch more Latin), Emmanuel Horvilleur, the former singer of Babasónicos, band as well included in our Play list.

However, Argentina is very fertile in other music styles; therefore, in our play list we find the reggae played by Nonpalidece, the hip-hop by Illya Kuryaki and the Valderramas, or the modern and electronic tango by the internationally known band the Gotan Project.

All this and much more make up our Play list Sounds of Argentina, which aims to do justice to the most characteristic sounds of this incredible country, Argentina.

If you want to check the complete playlist, you have it here: