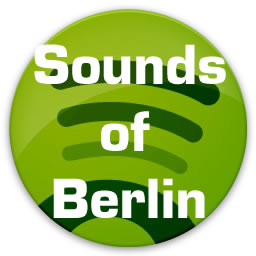 Like every Monday we want to contribute a little bit to get to know the music scene of the most important cities, and this week is ’s turn. The German capital is very well-known for its intense intellectual activity, reflected of course in the great amount of bands and music styles performed in Berlin.

We have included in our Playlist Sounds of Berlin not only very well known bands such as Atari Teenage Riot or 2Raumwohnung, but as well bands which could give us a wider picture of the music scene in . Therefore, in our list appear electronic bands such as Quarks, Mediengruppe Telekommander, as well as Chick on Speed, better known in , since their members live between and .

The Berliner band Kissogram represents the funny and dancy electropop, more suitable for those dancing-lovers who love this typical Berliner self-confidence.

Within our rock style we can listen to bands such as Wir sind Helden, Herpes, Bonaparte, Gods of Blitz, Super 700, Beatsteaks, etc.

is not only electronic or rock-pop music, because we can find a more folk-pop style like that played by Maximilian Hecker; as well as the very extended hip-hop style, with the popular bands Seeed and Peter Fox.

Through this Playlist, we expect you to get to know a bit better the fertile Berliner Music Scene.