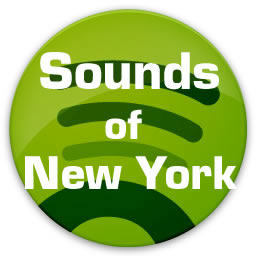 Like every Monday, this week we continue with our weekly playlist and now we have directed our attention to the capital of the world, New York. A city of contrasts, a melting pot of cultures, paradise of glamour, all reflected in each and every one of the bands that emerged or are continually emerging from its streets.

In our playlist Sounds of New York we want to make room for all kinds of sounds that characterize this city. Therefore, the listener can listen to some hip-hop with the praise to New York created by the famous rapper Jay-Z featuring New Yorker Alicia Keys, in their famous Empire State of Mind. We wanted to include as well classic bands from the capital of the world such as The Velvet Underground or Lou Reed with his Perfect Day, or Blondie and their legendary Heart of Glass.

With its effervescence, New York gives birth each year to a great many bands with very different styles. Two consolidated examples in the electronic scene are the duo MGMT, with its hit Kids; or the punk-funk-electronic band, LCD Soundsystem and its dancey Drunk Girls. Another banner of New York is the worldwide popular Norah Jones, noted for its delicious mix of jazz, soul and American country. We can not ignore the boldest pop-rock band Yeah Yeah Yeahs, or the classic rock performed by Lenni Kravitz, with his Fly Away. And of course the great sensation of the current music scene, the main reference of the American mainstream, the New Yorker singer to be the next Madonna, Lady Gaga and her dancey Telephone featuring Beyonce.

Within the indie scene, we have included New Yorker bands such as The Strokes with its famous hit Last Nite and the darlings of the critics, Vampire Weekend. We couldn’t help including as well Yeahsayer and their single O.N.E. or the bold and fresh The Drums and Let’s go surfing among other bands that you can listen to in our playlist Sounds of New York.

New York is one of the musical references worldwide and with our playlist we expect to be as faithful as possible to all the sounds that characterize this amazing city.

You can find next the complete list of bands:

The Velvet Underground – Venus in furs