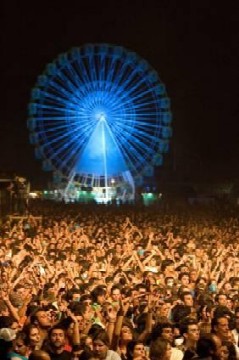 Every summer, Portugal hosts a large variety of outdoor festivals inviting everyone to enjoy the best sounds under a clear evening sky. 2011 is no exception, and there are some great line ups this year with some incredible bands.

Here are some of the best festivals taking place this summer in Portugal:

Cascais Cool Jazz Fest – From the 4th to the 29th of July, a range of top artists await you on the very stage of Cascais such as Maria Rita, Céu, Jaime Cullum and Seal in this festival offering not only jazz, but also various styles of music in a lively and welcoming atmosphere.

Super Bock Super Rock – In Meco, just a few kilometres away from the South of Lisbon is a great beach, which will be transformed into a stage for one of the most important summer festivals in Portugal. From the 14th to the 16th of July, artists such as Portishead, Arcade Fire, The Strokes and the Arctic Monkeys will be offering you the best in indie sounds for a great price.

Marés Vivas – Also taking place on the 14th to the 16th of July, but more to the north in the direction of Oporto, is Marés Vivas in Vila Nova de Gaia. Manu Chao, Moby, Skunk Anansie, Mika, Áurea and Tindersticks, amongst others, will be gathering there to offer you the best in music.

Sudoeste TMN – In Zambujeira do Mar, on the Portuguese coast and not far from the Algarve, artists such as Snoop Dogg, Kanye West, Amy Winehouse, Scissor Sisters, Interpol and Underworld will be gathering in the Sudoeste TMN festival. From the 3rd to the 7th of August, sun, good music and sand await you.

Paredes de Coura – Alternative music will be invading north Portugal from the 17th to the 20th of August. Pulp, Deerhunter, Mogwai, Crystal Castles, Kings of Conveniente, DFA 1979, amongst other stars from the international music scene will be performing in this prestigious festival.

Vagos Open Air 2011 – The most important metal festival in Portugal will be celebrated in Aveiro on the 5th and 6th of August, with a great line up including bands such as Opeth, Tiamat, Anathema and Morbid Angel.

With its beaches, monuments, scenery, food and people, etc, there are so many reasons to visit Portugal this summer, music just being an added advantage. However, heading down to one of these festivals will surely complete your travels to Portugal and help you break out of the normal holiday routine.