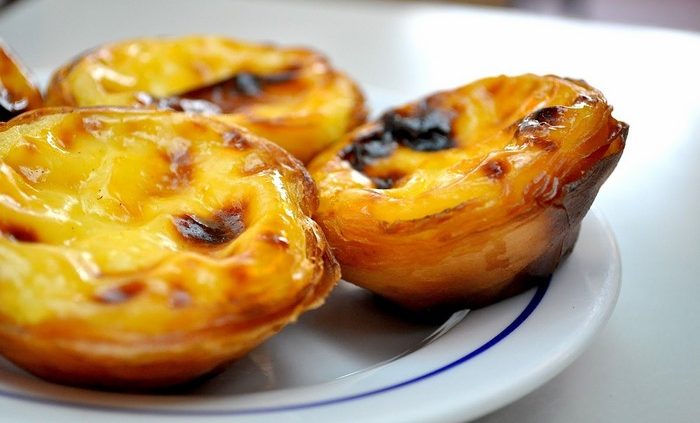 What’s the first thing that comes to mind when you think about Portugal?

Famous footballers, explorers of continents, fado, old buildings painted in bright colours… There are lots of possibilities and everyone who has been to Portugal will have their own favourite. As a lover of good cooking, I’m a great fan of Portuguese cuisine. They have great wine, fish and seafood. And spectacular desserts. The recipes for Portuguese sweets and pastries are some of the country’s best-kept secrets.

Portuguese sweets are similar to many of the ones you can find in Spain, as both come originally from convent kitchens with Arabic influences. Nuts, such as almonds or hazelnuts, puff pastry, cinnamon and pastry cream usually feature in their ingredients. These are some of the best known ones.

Pastéis de Belém.- Top of the list are these typical tasty morsels from Lisbon. These little tarts are filled with custard with a little sugar and cinnamon sprinkled on top. The recipe has its origin in the Jerónimos Monastery, in neighbourhood of Belém, hence their name. Although you can find pastéis de Belém or similar throughout Lisbon, they make the original ones right next to the monastery, at the Fábrica dos Pastéis de Belém. They make no less than 20, 000 a day!

Queijadas de Sintra.-These delicious little tarts are made with fresh cheese, eggs, cream and sugar. The recipe goes back to the 13th century. Although you can buy queijadas in many places, one of the great classical pastry shops is Piriquita, in Sintra, whose recipe goes back to 1862.

Fios de Ovos.-These yellow strands are made of egg yolks boiled in a sugary syrup, which gives them their intense colour. They are normally used as a filling or decoration for other pastries, although they can also be served as a garnish for salmon, canapes, meat or hors d’oeuvres on festive occasions, where their colour also contrasts with their sweet flavour.

Bola de Berlim.– As their name suggests, these sweets originally come from Germany, but the Portuguese add their own special ingredient that turns this doughnut-like pastry into a mouthwatering sweet. In Portugal, bolas de Berlim tend to be bigger than their German counterparts and are filled with pastry cream. Perfect with a cup of coffee.

So now you know, if you go to Lisbon or any other Portuguese city, treat yourself to one of its best-kept secrets.

Posted in Lisbon, Where to eat in Lisbon
Laura