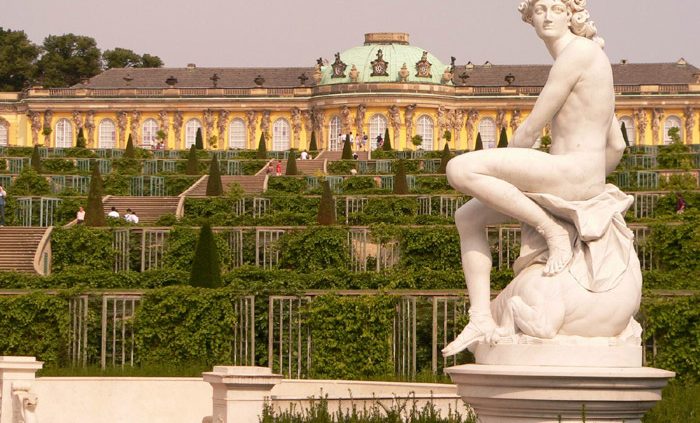 Gardens and palaces of Potsdam in a day

Some 30km away from Berlin is Potsdam, an iconic city combining art and nature. It is dubbed one of the most beautiful cities in Germany, and is the perfect place to go on a trip from Berlin and spend an unforgettable day on holiday.

For more than three centuries Potsdam was residence to the Hohenzollern dynasty, the Prussian kings that transformed the city with works from the best artists of the 18th and 19th century. Its elegant palaces and historical gardens are declared UNESCO World Heritage Sites.

What to see in Potsdam

In the middle of beautiful natural landscapes are many palaces, gardens and interesting things to see. However, if you’re only going to be in Potsdam for a day then here are some of the best places to go to. Make sure you don’t miss out!

The Sanssouci Palace – Considered the German equivalent of the Palace of Versailles in Paris, this Rococo treasure, is the most famous monument in Potsdam. It was commissioned by Frederick the Great who wanted to live “sans souci” meaning “without concerns” in French. It is part of the Sanscouci Park, comprising magnificent gardens housing other majestic buildings including the Orangery Palace, the Charlottenhof Palace, the New Palace of Potsdam and the Chinese House.

The Cecilienhof Palace – This palace, that looks like an English country estate, was where the Potsdam Conference of 1945 was held. This was where Stalin, Churchill and Truman gathered to decide the future of Germany and its division following the end of the Second World War. It currently houses a museum.

Potsdam historical city centre – Situated amongst its charming streets is the Dutch district with red brick houses. Potsdam was home to several colonies of immigrants demonstrated by the group of buildings there, unique to Potsdam in Europe. A little further to the North you will find the picturesque Russian colony Alexandrowka with houses built of decorated wood logs.

Glienicke Bridge – Situated in the posh Neubabelsberg district, the Glienicke Bridge, also known as the Bridge of Spies, crossed the border during the Cold War. It was often used by Russian and North American agents to exchange captured spies.

Universum Film AG and Cinema Museum – Potsdam is a film city. You will find the famous UFA Film Studios there which went through its golden age during the time of silent cinema and the Second World War. They recorded legendary films such as “Metropolis” by Fritz Lang and “Nosferatu” (the Vampire) by F.W. Murnau.

Directions to Potsdam from Berlin

Potsdam is barely 40 minutes away from Berlin. Although you can get there by car or train, the best way is by train on the S7 line from S-Bahn. The trains to Potsdam pass by approximately every 30 minutes. To travel from Berlin you need to buy a ticket valid for zones A-B-C. Enjoy your trip!

Posted in Berlin, Things to do in Berlin
Laura