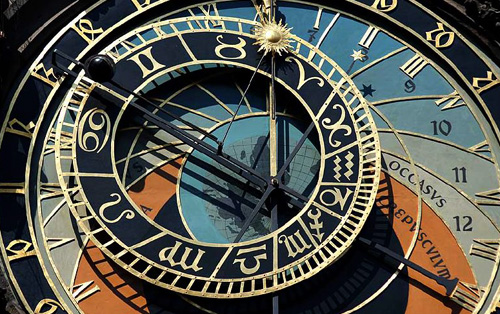 Prague Astronomical Clock history and how it works

Tick-tock, tick-tock, tick-tock. Time goes on. More often than not faster than we would like other times so slowly that it appears time has frozen. There are many clocks where we can observe how time slips through our fingers but not many as famous as the Prague Astronomical Clock. The clock, located on the south wall of the Old city Town hall, is one of the cities most popular tourist attractions. According to legend it was built in 1490 by the master clockmaker Hanus, the beauty of the clock was such that the local authorities decided to blind Hanus with a red hot poker so that he would be unable to build a copy of the clock anywhere else. Seeking revenge Hanus’ apprentice, Jakub Cech, stuck his hand in the clock’s mechanism, blocking it and rendering it useless and losing his hand in the process.

Legends aside, the Prague Astronomical Clock is a masterpiece of its time. Recent studies have shown that work started on the clock in 1410 which makes it one of the oldest clocks of its kind.

The Prague Astronomical Clock is composed of three parts: The Astronomical Dial– in the form of an astrolabe, a mechanical device used in medieval astronomy, is the oldest component of the clock. The function of which was not only to tell the time but also represent the orbit of the Sun and Moon and other astrological bodies. Flanking the clock are four figures representing Vanity, Greed, Death and Lust, these four were despised at the time of the clock’s making.

The Animated Figures– One of the most attractive things about the Prague Astronomical Clock is the animated figures. As the timing of the hour draws nearer curious crowds gather at the clock to witness the animated figures in movement. Besides the allegorical figures of the clock, the twelve apostles are also paraded every hour from the two doorways above the clock.

The Calender- The lower sphere on the Clock Tower depicts the months of the year through rural scenes. Painted by Josef Manes in the 19th century its movement is coordinated with the Astronomical clock. A golden needle indicates the date, the associated religious festival and the sign of the zodiac.

If you are interested to know how the Prague Astronomical Clock works you can visit the town Hall Clock Tower on the hour and observe the giant clock mechanism from inside the tower. You can also appreciate good views of Prague Old City from the top of the tower. Open from 9am to 10pm Tuesday to Sunday and 11am to 10pm on Monday. Admission is 120 czech crown (about €4). You can chek all the schedules and prices in the official website.