Premiere of Spiderman, the musical on Broadway 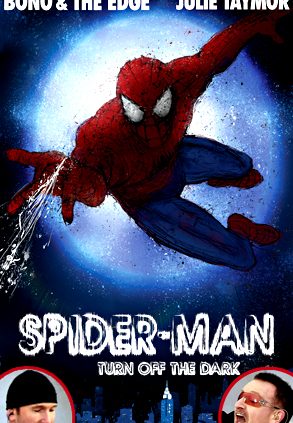 Premiere of Spiderman this 2010

It is already confirmed, on December the 21st takes place the premiere on Broadway in New York the expected musical about the intrepid Spiderman. The definite title is Spiderman Turn off the Dark, and the debut is to be in the musical theatre Foxwoods on the life of Spider-Man, one of the most legendary superheroes created at the Marvel house.

After many rumours, comings and goings, financial problems and desertions in the casting, everything is going smoothly for the final release of this musical. The musical will be directed by Julie Taymor, who has directed films such as Frida and Across the Universe, and its soundtrack is arranged by Bono and The Edge, lead singer and guitarist respectively of the legendary band U2.

Initially the release was announced for Feb. 15, and for then it counted with the participation of Alan Cummings and Evan Rachel Woods. However, tired of waiting, they broke away from the project and their roles have fallen on Patrick Page and Jennifer Damiano, very little known in Europe, but with a solid career behind them on the Broadway stages. Both actors play the enemy of Spiderman, the Green Goblin and his girlfriend Mary Jane Watson, respectively.

The starring role has finally fallen on the singer and actor Reeve Carney, who participated with the director in another film project, and on whom will fall the full weight of this elaborate production due to the complexity of the special effects and music. However, his musical experience and artistic quality has gained him the confidence of producers and the director.

If you visit New York around that time and you are fan of the legendary Spiderman, you know that you can enjoy this visual and musical show at the Foxwoods Theatre from 21st December.