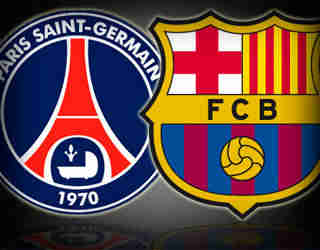 After a shaky start in the first leg of the Final-16 of the Champions League where Barcelona lost to Milan 2-0, they stormed into the quarter finals with an impressive 4-0 victory in the Nou Camp. Meanwhile PSG made it through comfortably against Valencia 3-2 on aggregate with an away win and a draw at home. The UEFA Champions league quarter final draw has seen these two teams pitted against each other, the first leg between PSG and Barcelona will be played in Parque de los Principes the 2nd of April and the return leg will be played in the Nou Camp 10th of April 2013.

Adding to the emotion of the Champions league quarter final 2013 match up between PSG and Barcelona is the return of ex-blaugrana and PSG striker Zlatan Ibrahimovich to the Nou Camp; he will miss the first leg through suspension. The match will also be an opportunity for ex-blaugranas Maxwell and Motta to face their old team.

Currently both teams are sitting atop their respective league tables, PSG with a four point lead over their nearest rivals Lyon and Barcelona 13 points clear of arch rival Madrid. The last time these two sides met competitively was in the club World Final in May 1997 with Barcelona winning 1-0. They played a friendly last summer with Barcelona winning on penalties.

Reactions to the Champions league quarter final between PSG and Barça have been positive with both sides excited at the prospect of facing each other. Barcelona sporting director Andoni Zubizaretta said they (PSG) were a very good team with talented players across every line, from the goalkeeper to the strikers”. Whilst PSG coach Ancelotti said he was delighted with the draw and Barça along with Real Madrid were favourites in the competition but PSG would have something to say about the final result.

The first leg of the Champions League quarter final 2013 between PSG and Barcelona promises to be another classic Champions League match between these two great clubs, start looking for your accommodation in Paris now so as not to miss out. For more detailed player information and statistics leading up to the match go to the barcelonafcblog.