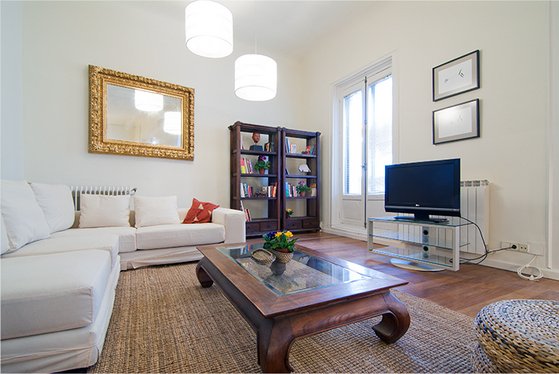 Apartment of the week in Madrid, the Latina XV

Madrid hots up during May and June. We’re not talking about the temperature increase (which still hasn’t arrived), but simply the large quantity of parties, exhibitions, concerts and activities that are on offer in the city during these months.

To begin, until the 10th of June the San Isidro celebrations will be taking place in the Plaza de Toros de las Ventas. This is one of the most important bullfighting fairs in the world. For those who prefer your art to come through a lens, from the 21st of May the 14th Week of Short Film will be celebrated. From the 7th to the 10th of June Madrid Photo 2012 will take place, and from the 6th of June you can take part in Photo España 2012.

Still need an excuse to get away to Madrid for a few days? How about visiting the market El Rastro, trying some typical squid sandwiches or a juicy hamburger and going for a dusk stroll to the Temple of Debod.

So that you don’t miss a thing, today we’re going to recommend an apartment in Madrid. Perfect for travelling as a family or group of friend, it has a maximum capacity of eight people. We’re talking about the Latina XV, an apartment situated in one of the oldest and most beautiful areas of the city: the neighbourhood of la Latina, also known as “the Madrid of the Austrians”.

A short distance from this apartment lie the Plaza Mayor, the Puerta del Sol, the Parque del Retiro and the Royal Palace. All these historical sights, which are typical of Madrid, are just a short walk away.

The apartment Latina XV is in a period building, with wooden beams, wide spaces where you can pass the time chatting and large French windows. It comprises three bedrooms and two bathrooms, so there’s no need to wait your turn when you’re getting ready to go out and discover the legendary Madrid party scene. Its decoration contrasts the most modern furnishings and installations with vintage-style items, giving it a very particular charm.

This apartment in Madrid comes fully equipped with air conditioning, heating, WiFi connexion, cable television and all the big and small electrical appliances that you might need to have a great time in the Spanish capital.