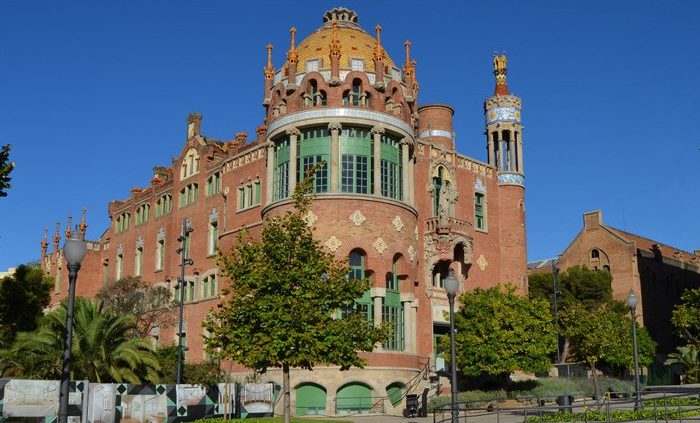 When people talk about Catalan Modernist art in Barcelona, everyone immediately thinks of Antoni Gaudí, the Sagrada Familia and his other dreamlike buildings with their characteristic coloured mosaics. But Barcelona is not only home to the Mozart of modernisme—we can also find its Salieri here too: Lluís Domènech i Montaner. Because although this architect has been somewhat overshadowed by Gaudí, he created some truly spectacular buildings.

The Hospital de la Santa Creu i Sant Pau was built between 1902 and 1930 to meet the demands of an expanding city with a growing number of inhabitants. Domènech i Montaner designed it as a garden complex where patients could enjoy wide spaces in the open air. It was also equipped with the latest developments in healthcare.

The former Hospital de Sant Pau in Barcelona is made up of a number of separate pavilions given over to different medical specialties and linked by underground tunnels. It occupies an area of nine city blocks in the Eixample, making it the largest modernist complex in Europe.

It has been a UNESCO World Heritage Site since 1997. In 2009 the hospital moved into new premises and the former modernist complex is now a cultural space that is home to organisations such as Casa Àsia and the European Forest Institute. It is also used for holding events and exhibitions. Wandering through its pavilions and gardens it like taking a trip back through art and history.

Visit the Sant Pau modernist complex: opening hours, prices and how to get there

General admission costs €10, although there are concessions for students, young people and pensioners. Under-16s go free but must be accompanied by an adult. There are guided tours in Catalan, Spanish, English and French; other languages are available upon prior request.