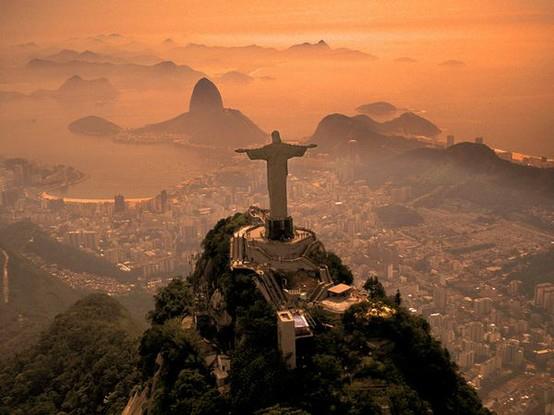 What to see and do in Rio de Janeiro

Rio de Janeiro is one of the most fascinating cities in Sth. America. Since the 16th century the surrounding rivers, mountains and lagoons have witnessed the growth of this beautiful metropolis to what it is today, one of Brazil’smajor economic and cultural centres. Internationally known for carnival, its cheerful character, green scenery and abundant cultural icons, in Rio de Janeiro you will find more than enough reasons why it is known as the “Marvelous City”.

So that you don’t get lost amongst the enormous quantity of things to see in Rio de Janeiro, we have prepared this small guide with the most important monuments and sights you shouldn’t miss during your stay in the city. Christ the Redeemer- Also known as Christ of Corcovado, the imposing silhouette of this statue outlined against the sky is the most characteristic symbol of Rio de Janeiro. Built in 1931, this 38m tall statue weighing 35 tonnes was a real challenge for the engineering of the day. Christ the Redeemer stands more than 700m above sea level on Corcovado Mountain and offers spectacular views over the city. This guardian of Rio de Janeiro is one of the seven wonders of the modern world. How to get there?: The best way is to take the cable railway from Rua Cosme Velho, 513. Sugar Loaf Mountain- Surgar Loaf is an almost vertical peak rising 400m from sea level. Located in Guanabara Bay it is one of Rio de Janeiro’s major tourist attractions. It is one of the greatest and largest urban rock climbing areas in the world. If rock climbing isn’t your thing, don’t worry, there are other ways to reach the top. One of them is to take the “bondhinho”, a cable car which offers amazing views of Rio de Janeiro and the summit of Sugar Loaf is the perfect place to enjoy the sunset. Where: Praia Vermelha. Pasteur Av, 520. When: The bondhinho operates from 8am-9pm, tickets are sold until 7:50pm. How Much: R$50 Adults, R$26 Children 6-12, Children under 5 free. Discounts for students and retired. Tijuca National Park- This mountainous forested area encompassing various mountains like Corcovado is an oasis inside Rio de Janeiro. Formerly coffee was cultivated here but in 1860 the emperor of Brazil, Pedro II, ordered that the zone be reforested with the original natural resources. This park is now a recreation area where trekking, caving and other activities are done. It is considered a biosphere reserve by UNESCO. Getting there: The best way is by bus (lines Rodoviaria Novo Rio/ Alvorada 233, 234- praça Maua(centre)/ Barra de Tijuca-225) or car. Maracaná Stadium- The Jornalista Mário Filho Stadium, better known as Maracaná Stadium, is a symbol of sport and the football culture of Brazil and is also one of io de Janeiro’s major tourist attractions. Housing the football museum it hosts guided tours daily although the best option is to see a match and experience the emotion of Brazilian football. It will play host to the 2014 Football World Cup. Where: Rua Professor Eurico Rabelo. When: Tues-Sun 9am-10pm How Much: R$20 Modern Art Museum (MAM)- This museum houses an impressive collection of contemporary and modern art including paintings, sculptures and etchings of Brazilian and International artists. Interesting exhibitions are also organised periodically. Sitting in the middle of the Flamengo Park Gardens it is centrally located and a the gardens offer a pleasant place for a stroll. The MAM is a must see for all art lovers. Where: Av. Infante Dom Enrique, 85. When: Tues-Fri 12pm-6pm. Sat-Sun and Holidays 12pm-7pm How Much: R$8. Pensioners and Students R$4. Rio de Janeiro Beaches- Kilometres and kilometres of magnificent beaches extend along the city, the most famous of which are Copacabana and Ipanema. It would be a sin to visit Rio de Janeiro and not visit one of them. We’ll give you a tip, the best beaches are to the south of the city facing the Atlantic Ocean.

These are only a few of the main tourist attractions in Rio de Janeiro but if you have time, you must visit the National Museum of Fine Arts, the Botanic Garden, the Imperial Palace and many others in what is becoming one of the World’s major tourist destinations.