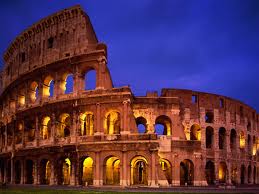 The main sights of Rome

The City of Seven Hills, the Eternal City, the City of Fountains… call it what you want, Rome, Italy, is one of the world’s top tourist destinations, and with good reason. Its precarious position on top of an ancient empire makes it a fabulously interesting place to visit. They say that Rome wasn’t built in a day, and the city’s tourist attractions can’t all be visited in a day, either, but here we’ve whipped up a five-minute guide to some of the main sights of Rome.

THE VATICAN – Funnily enough, the of the main Rome tourist attractions that we’ve recommended is not actually in Rome. The Vatican is, technically, a state apart, but one that contains many of Rome’s most important treasures: the Sistine Chapel, St. Peter’s Basilica and much more. You can see it all from afar through the Aventine keyhole.

THE COLOSSEUM – The Colosseum is technically the most popular of all the sights of Rome, with nearly five million visitors each year. This 2000 year old building had seating space for up to 50,000 spectators. Stand in the arena and imagine what it was like in past times: although time has obviously taken its toll on this ancient building, you can practically hear the gladiators clash. Location and opening times and prices described from the Rome Tourist Board.

THE TREVI FOUNTAIN – The Trevi Fountain, built in the Baroque style, is without a doubt the most famous fountain of Rome. It’s a nautical montage, which features Neptune and two Tritons. Legend goes that if you throw a coin into the fountain, you’re sure to return to Rome…

THE PANTHEON – The Pantheon is an impressive Roman temple which has survived everything history can throw at it to become possibly the best example of Roman architecture in the modern world. Its giant dome and imposing columns are one of the best-loved sights of Rome. Entrance is free.

THE TRASTEVERE DISTRICT – A warren of bars, restaurants, narrow streets and other curiosities; the Trastevere district in Rome is one of the best places to come if you want to just generally soak up the atmosphere of the city. It contains various places of historical interest, as well as lots of excellent restaurants, perfect for trying out the famous Italian cuisine or even just grabbing something to eat in some of the pizzerias in Rome.

There’s obviously many other places to visit in Rome. We haven’t even got started on the Spanish Steps, the Catacombs or the Galleria Borghese. Unless your visit is as eternal as the city, however, these are the sights in Rome that we’d most highly recommend.